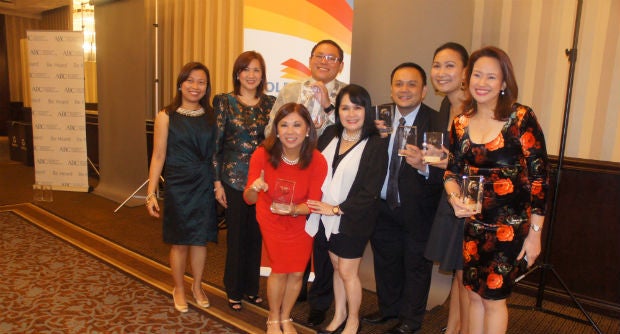 The Philippines brought home 10 Gold Quill awards from the International Association of Business Communicators (IABC). In photo are representatives from PAGCOR, SMART, ABS-CBN, Shell and PRU Life. Also in photo is Ms. Ritzi Aquino (4th from right) of IABC Philippines. Courtesy of Pagcor

MANILA, Philippines–The state-run Philippine Amusement and Gaming Corporation (Pagcor) has been named one of the global Gold Quill Awardees for 2014 for its school-building project.

The award was given by the International Association of Business Communicators (IABC), a professional network of more than 15,000 business communicators in 70 countries. The Gold Quill is IABC’s flagship program that pays tribute to communication excellence worldwide and recognizes the strength of research-based, strategy driven work on an international scale.

Pagcor said the new achievement “puts the state-owned gaming firm among the ranks of the world’s companies with the best business communication and PR campaigns.”

Maricar Bautista, Pagcor’s assistant vice president for corporate communications, said the international Gold Quill Award that the state-owned gaming agency received also brought honor not only to Pagcor but to the country as well.

“We are very proud of this achievement because it shows that Filipinos can truly stand out in the field of business communication,” Bautista said in a statement on Tuesday.

“Only six companies from the Philippines made it to the elite circle of the 2014 Gold Quill winners worldwide. Pagcor along with the other local companies have done the country proud. Their projects are equally laudable,” she said.

IABC received a total of 783 entries around the world. Of the 281 entries that qualified, 10 entries from the Philippines won–one from Pagcor, one from ABS-CBN, two from Shell, four from Globe, one from SMART and one from PRU Life UK.

Bautista said what was even more rewarding was the recognition that the international Gold Quill has given to Pagcor’s Corporate Social Responsibility (CSR) projects, particularly the strong impact of the agency’s school building program to the education sector in the country.

Pagcor said its school-building program was the agency’s way of helping the Philippine government address the shortage of classrooms in public schools nationwide. To date, the state-owned gaming firm has allocated a total of P5 billion for the project, P2 billion of which will be used to build classrooms in Yolanda-devastated areas.

“This is an amazing program that delivered wonderful progress to the community.  Its video (on how Pagcor’s school-building program touches the lives of poor public students in different parts of the country) is strong and presents a compelling story,” the evaluators said.

“Pagcor carried out a thorough multi-media campaign through a variety of channels. The agency’s corporate communications group did a fantastic job of getting the word out and building a very strong campaign (about Pagcor’s school building project),” they added.

Amanda Hamilton Attwell, chair of the International Gold Quill for 2014, said the senior evaluators from different parts of the world reviewed all entries based on IABC’s global seven-point scale of excellence for strategic communication planning and implementation. 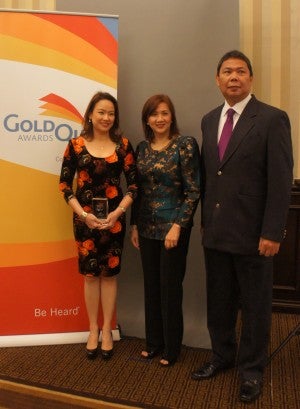 “Winners of the Gold Quill Award (including Pagcor) demonstrate that their work is aligned with business needs. Their audience characteristics are clearly described, objectives are meaningful and measurable, and results of their campaign demonstrate that the work they did made a difference for their organization and stakeholders,” Hamilton-Attwell said.

“We thank all our evaluators for helping us screen hundreds of entries. Each entry was reviewed for two hours.  All in all, our evaluators spent 1,958 hoaurs in screening all these entries. And they all did this for free,” McCasland said.

Other winning entries came from the following countries–136 from the US, 79 from Canada, 13 from South Africa, 12 from Australia, eight from the UK, six from New Zealand, six from Russia, two from Switzerland, two from Italy, one from Botswana, and one from Singapore.