• 125,000 young people are eligible for Medi-Cal, but bureaucracy stands in the way 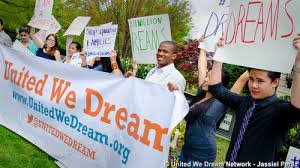 SAN FRANCISCO, California — Itzel Martinez, a 20-year-old DACA (Deferred Action for Childhood Arrivals) student living in Oxnard, California, desperately wants health insurance because she knows what it means to be without it.

A kitchen accident she suffered last year that resulted in a trip to the emergency room to stitch up her split lip set her farm-working parents back by $1,500. To this day, they haven’t been able to get a collection agency off their back.

Martinez, one of five children, said that when she went to the Ventura County Human Services Agency a few months ago to apply for Medi-Cal — the state’s name for the health insurance program for low-income people known as Medicaid in the rest of the nation — she was told that she only qualified for restricted Medi-Cal because of her DACA status. Restricted Medi-Cal covers only emergency and pregnancy-related care and is given to most anyone who applies for Medi-Cal.

Sacramento DACA student Bernardina Garcia said she’s been on tenterhooks for months because she’s waiting to learn if she’s approved for Medi-Cal. She applied for it back in January with help from a children’s health care advocacy worker. The 21-year-old Sacramento State student said she’s tired of trying home remedies for her recurring ear infection because they only provide her temporary relief.

Martinez and Garcia are among an estimated 125,000 young people between 15 and 30 years old in California who became eligible for Medi-Cal when they were granted temporary legal presence and work authorization under a 2012 presidential initiative known as Deferred Action for Childhood Arrivals (DACA).

A slew of challenges have kept hundreds of thousands of DACA students like Martinez and Garcia from getting a coveted Medi-Cal card. Obstacles include onerous paperwork requirements, ignorance among many county eligibility workers that DACA beneficiaries are eligible for state-funded Medi-Cal and the state’s new consumer-oriented web portal known as CalHEERS.

Undocumented immigrants are legally prohibited from enrolling in the Affordable Care Act. But California’s Medi-Cal program authorizes coverage for certain groups of people who are lawfully present in the United States such as those approved for the DACA program. The cost is funded not by federal resources, but through state funds. Even so, a DACA applicant must meet the income eligibility stipulated in traditional Medi-Cal: the individual’s annual income should be less than $15,856, or $26,951 for a family of three.

California currently has a backlog of 900,000 Medi-Cal applications waiting to be processed. No one knows how many of those have been filed by DACA beneficiaries. And scores of DACA youth themselves still don’t know they even qualify for Medi-Cal, according to a University of California study published in March this year. The study shows that Latinos make up about 82 percent of DACA recipients and about 60 percent of the 7 million uninsured Californians.

Obstacles in getting Medi-Cal

Maria Romero-Mora, a program coordinator with California Coverage and Health Initiatives (CCHI), has been helping DACA beneficiaries in seven of California’s 58 counties to apply for Medi-Cal. She said the new, complex 35-page paper form (it was six pages long earlier) intimidates many first time applicants, who also have to fill out an accompanying so-called MC 13 form that asks, among other things, for the applicant’s social security number and tax filing status of the parents — if the applicant is filing as a dependent.

CCHI’s Executive Director Suzie Shupe said parents who file a Medi-Cal application on behalf of their DACA children are understandably nervous when they go before county officials.

“It’s not surprising that people are leery of revealing their status in an official setting,” she said.

“Imagine how it must be for them,” Romero-Mora observed, “they don’t speak the language. They are very shy and nervous about authority. If they say anything wrong, their application won’t be processed. Or their immigration status might be jeopardized.”

She said that her clients worry that anything they say might come back to bite them even though the Immigration and Customs Enforcement (ICE) agency said in a memorandum issued last October that information provided by individuals for health coverage will not be used for purposes other than “verifying certain eligible determinations.”

Asked if she had been afraid of revealing her immigration status on her Medi-Cal application form, Garcia, a client of Romero-Mora’s, responded: “There’s always that fear deep down that immigration officials might come after my parents.”

County workers in the dark about eligibility

Exacerbating the problem for DACA students is that many county eligibility workers are not aware that DACA beneficiaries are eligible for state-funded Medi-Cal.

“We’ve heard reports from several counties that information has not gotten out to them,” asserted Shupe, noting: “It’s more than just a problem here and there.”

Romero-Mora cited her own experience last April when she got a call from a Solano County worker, who said that while she and her peers became aware through the CCHI website that DACA recipients were eligible for Medi-Cal, “our supervisors are telling us they are not.”

As a result, scores of DACA beneficiaries in a number of counties are being notified that they would only get restricted Medi-Cal benefits.

Tanya Broder, a staff attorney with the National Immigrant Law Center said she was not surprised that this was happening. Counties, she said, need to be educated.

Betzebel Estudillo, health policy coordinator with the California Immigrant Policy Center, said that she has heard from health care advocates that a number of DACA students in the Inland Empire were turned away by eligibility workers from applying for Medi-Cal when they went on their own.

“This has been an issue for many months and has yet to be resolved,” noted Frank Mecca, executive director of County Welfare Director’s Association (CWDA) of California. He said the state’s new computer system, known as CALHEERS, “does not recognize the DACA status and is only providing restricted Medi-Cal benefits rather than full-scope benefits.”

Mecca said that given how quickly “the landscape for implementing the Affordable Care Act has evolved,” his agency has been providing guidance and technical information to counties.

“But often times,” he lamented, “specific implementation direction has not been released in a timely manner to allow counties to serve clients to the best of (the) counties’ ability. To date, the Department of Health Care Services (DHCS) has not issued formal policy on Medi-Cal eligibility for DACA youth.”

Anthony Cava, a spokesman with the California Department of Health Care Services (DHCS), acknowledged that such technological problems as the “needed interfaces” between the state and county computer systems did contribute to the delays. He said the DHCS is “working actively” to improve the system.

He added that counties are allowed 45 days to process applications.

“It’s unacceptable for the state and the county to not have the capacity to process Medi-Cal applications,” asserted CCHI’s Shupe.

DACA student Martinez meanwhile said she is so discouraged by her experience at Ventura County that she doesn’t plan to reapply any time soon.