• Individuals in DACA will be able to remain in the US and apply for employment authorization for of two years. 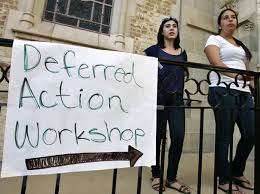 U.S. Citizenship and Immigration Services (USCIS) has submitted to the Federal Register an updated form to allow individuals previously enrolled in DACA, to renew their deferral for a period of two years. Effective immediately, USCIS will begin accepting renewal requests.

USCIS will also continue to accept requests for DACA from individuals who have not previously sought access to the program.  As of April 2014, more than 560,000 individuals have received DACA.

“Despite the acrimony and partisanship that now exists in Washington, almost all of us agree that a child who crossed our border illegally with a parent, or in search of a parent or a better life, was not making an adult choice to break our laws, and should be treated differently than adult law-breakers,” said Secretary Johnson.

“By the renewal of DACA, we act in accord with our values and the code of this great Nation. But, the larger task of comprehensive immigration reform still lies ahead,” Johnson added.

The first DACA approvals will begin to expire in September 2014. To avoid a lapse in the period of deferral and employment authorization, individuals must file renewal requests before the expiration of their current period of DACA.

DACA is a discretionary determination to defer removal action against an individual. Individuals in DACA will be able to remain in the United States and apply for employment authorization for a period of two years.

Individuals may request DACA renewal if they continue to meet the initial criteria and these additional guidelines:

The renewal process begins by filing the new version of Form I-821D “Consideration of Deferred Action for Childhood Arrivals,” Form I-765 “Application for Employment Authorization,” and the I-765 Worksheet.

There is a filing and biometrics (fingerprints and photo) fee associated with Form I-765 totaling $465. As with an initial request, USCIS will conduct a background check when processing DACA renewals.

To learn more about the renewal process or requesting initial consideration of DACA, visit www.uscis.gov/childhoodarrivals or call the USCIS National Customer Service Center at 1-800-375-5283.