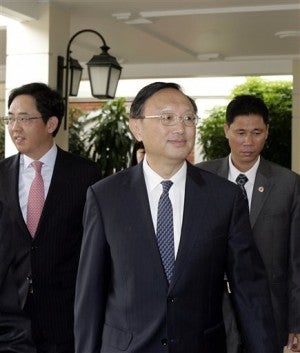 Chinese State Councilor Yang Jiechi, center, arrives at a hotel in Hanoi, Vietnam Tuesday, June 17, 2014. Yang’s visit is the first high-level meeting between the two countries since China’s deployment of a giant oil rig off the Vietnamese coast last month increased tensions between the neighbors. AP

HANOI, Vietnam — A top Chinese diplomat arrived in Vietnam on Tuesday for the first high-level meeting between the two countries since China’s deployment of a giant oil rig off the Vietnamese coast last month increased tensions between the neighbors.

Yang’s visit is the highest-level meeting between the two governments since the rig was deployed May 1, sparking anti-China riots in Vietnam that killed five Chinese nationals and injured hundreds more.

“As we have affirmed many times, Vietnam has always been patient to look for dialogue with China to peacefully resolve the tension in the East Sea,” Binh said, referring to the South China Sea. “This meeting, therefore, will surely be a channel and an event where the two sides can discuss the issue to find solutions to the current tension.”

Minh and Yang spoke by phone in early May. Vietnam’s Foreign Ministry said at the time that Minh denounced China’s placement of the oil rig, saying it seriously violated Vietnam’s sovereignty, and demanded that China immediately withdraw the rig and its escorting vessels.

Thu also disputed Chinese accusations that Vietnamese divers left obstacles in the water to disrupt drilling operations. He said Vietnam did not use divers near the rig but that fishermen were forced to leave behind nets and other equipment because Chinese ships used water cannons to force the fishing boats to retreat.