‘China back off,’ cry protesters to mark Independence Day 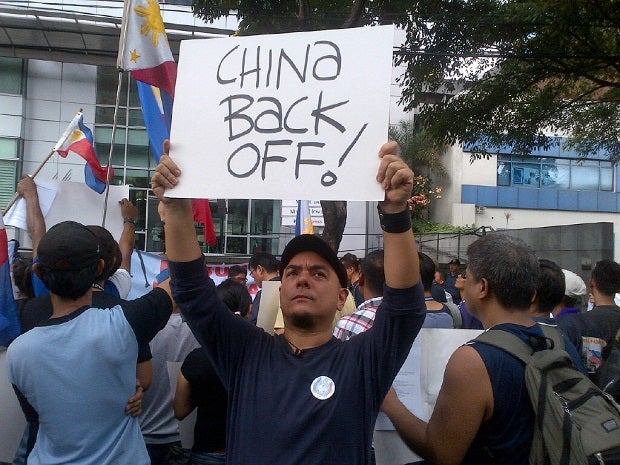 MANILA Philippines—Hundreds of militants stormed the Chinese embassy in Makati City on Thursday over the escalating maritime dispute in the West Philippine Sea.

Waving Philippine flags, the protesters who wore masks of Filipino hero Apolinario Mabini chanted “China back off”  to demonstrate their anger over reports of reclamation and construction in the Mabini Reef and other parts of the West Philippine Sea by Chinese workers. 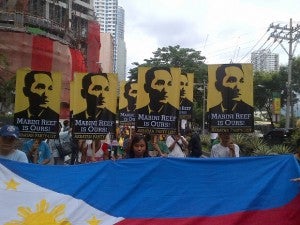 “The increasing aggression of the Chinese government in the West Philippine Sea is a direct affront to the Philippine’s independence and sovereignty. The reclamation in the Mabini Reef shows grave disrespect of China towards our country and our people,” Rafaela David, chairman of Akbayan Youth said.

Coinciding with the Independence Day, David said complete freedom would not be achieved until we have “sovereign control” over our territories in the West Philippine Sea.

The youth leader urged a “new revolution” among Filipinos.

“We must build a strong patriotic constituency particularly among the youth, through grassroots education,” she said.

She added that the government should ardently support soldiers and civilian population guarding our disputed islands.

According to her, Filipinos must organize civilian-led patriotic activities to demonstrate the people’s opposition to Chinese aggression.

Another youth leader lamented the country’s state 116 years after being colonized by foreigners. 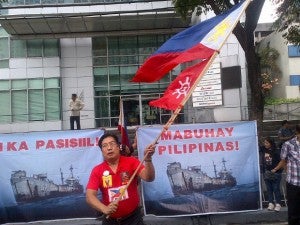 (Part of our independence is justification, sovereign rights and progress.)

(We should not only use Facebook.  It is better to participate in protest rallies.)

Patriotic songs were also played during the rally before protesters peacefully dispersed.

The demonstration went generally peaceful as no untoward incident was reported throughout the protest.