Vietnam, Japan stand up to China 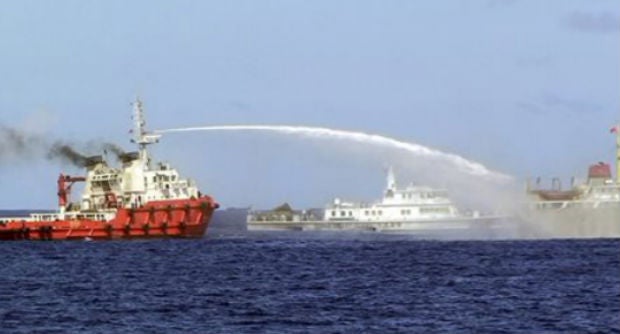 In this file photo released by Vietnam Coast Guard, a Chinese ship, left, shoots water cannon at a Vietnamese vessel, right, while a Chinese Coast Guard ship, center, sails alongside in the South China Sea, off Vietnam’s coast, on May 7. AP FILE PHOTO 

UNITED NATIONS—Vietnam and Japan are standing up to China in their maritime disputes, with Hanoi going to the United Nations for world help in expelling a Chinese oil rig from its waters and Tokyo summoning Beijing’s ambassador for a stinging rebuke over “dangerous” flights by Chinese jet fighters in Japanese airspace.

China has attempted to picture Vietnam in the United Nations as the offender in the East Sea, accusing Hanoi on Monday of sending ships to ram Chinese vessels protecting a deepwater oil drilling rig that it moved to Vietnamese waters on May 1.

Vietnam has hit back against China at UN headquarters in New York, ordering Beijing to withdraw the oil rig and stop “interfering” with maritime safety in the East Sea, part of the South China Sea within Hanoi’s 370-kilometer exclusive economic zone recognized under the United Nations Convention on the Law of the Sea.

The Vietnamese mission asked its position paper to be circulated to the General Assembly, becoming the second claimant to territory in the South China Sea to bring its dispute with Beijing to the United Nations.

In January last year, the Philippines took its own territorial dispute with China to the International Tribunal for the Law of the Sea after Beijing seized Panatag Shoal (Scarborough Shoal), a resource-rich fishing ground in the West Philippine Sea, South China Sea waters within Manila’s 370-km exclusive economic zone.

Manila submitted evidence of Beijing’s incursions and aggressive acts in the West Philippine Sea in late March, and the UN tribunal ordered China to respond to the Philippine case by Dec. 15.

China claims nearly all of the South China Sea, even waters approaching the coasts of its neighbors, and has become increasingly assertive in staking those claims.

Besides Vietnam and the Philippines, Brunei, Malaysia and Taiwan also have competing claims to parts of the sea.

On Thursday, Japan summoned the Chinese ambassador to complain about jet fighters flying “dangerously” close to two of its military planes over the East China Sea.

“It was an action that was extremely regrettable, and which cannot be tolerated,” top government spokesperson Yoshihide Suga said, referring to Wednesday’s incident.

It was the second time in less than three weeks that Tokyo has accused Beijing of playing chicken in the skies near the hotly contested Japanese-controlled Senkaku Islands, which Beijing also claims and calls Diaoyus.

“It comes after a similar event which occurred last month,” Suga said. “The government will continue urging China to prevent an accident and restrain itself.”

The incident occurred as Japan and Australia held the fifth round of so-called 2+2 talks between their defense and foreign affairs chiefs in Tokyo.

The meeting was part of a trend in which military and political alliances are being forged and strengthened around the Asia-Pacific region, as countries in the area look with alarm at China’s growing willingness to forcefully push its claims in territorial disputes.

Beijing’s decision to move the oil rig to the East Sea has led to confrontations between Chinese and Vietnamese vessels near the Paracel Islands, resulting in the sinking of a Vietnamese fishing boat by a Chinese vessel on May 26 and in the condemnation by other countries, including the United States, of China’s “provocative acts.”

In the United Nations, Vietnam demanded that China withdraw the oil rig, “escort vessels from Vietnam’s maritime zones and stop all activities that are interfering with maritime safety and security, and affecting regional peace and security.”

The Vietnamese government called on China to “promptly commence government-level negotiations” on sovereignty over the contested waters.

Vietnam released videos of the confrontations showing Chinese vessels using water cannon to prevent the Vietnamese ships from getting near the oil rig.

The video of the May 26 incident showed a Chinese vessel ramming the Vietnamese fishing boat.