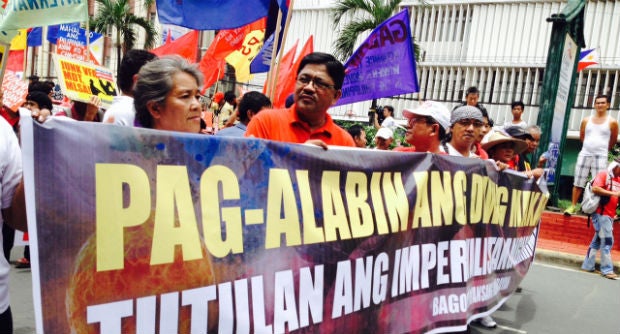 MANILA, Philippines—The Enhanced Defense Cooperation Agreement (Edca) will not help the Philippines stand up against the aggressiveness of China, a militant group reiterated on Thursday.

“We should stand on our own feet and get the support of all countries who respect our sovereignty, not just the US and not through the return of US troops,” Former Bayan Muna Partylist Representative Teddy Casiño told reporters.

“Edca will only worsen the situation and escalate the possibility of conflict in the region,” he said.

Militant groups marched to the US Embassy Thursday to commemorate Philippine Independence Day and to protest the Edca.

Edca was signed by the Philippines and US last April 2014 paving for the increased rotational presence of US troops that will be stationed in “agreed locations” throughout the country.

The agreement is widely regarded as a deterrent to China’s aggressive territorial claims in the West Philippine Sea (South China Sea).

The protesters were blocked by police in front of the National Library of the Philippines in Manila where they held their program.

Binay: EDCA not meant to ‘freeze ties’ with China