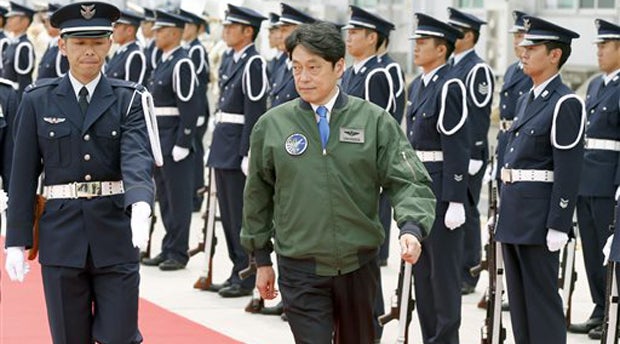 Japan’s Defense Minister Itsunori Onodera, center, reviews honor guard ahead of a commemoration ceremony to mark the 60th anniversary of the foundation of Japan Air Self-Defense Force, in Irima, near Tokyo Sunday, May 25, 2014. Chinese and Japanese officials traded accusations Sunday after Chinese fighter jets came within dozens of meters (feet) from Japanese military aircraft that had entered an air defense zone declared by Beijing over the East China Sea. AP/Kyodo News

Defense Minister Itsunori Onodera said two Chinese SU27 fighters approached as close as 30 meters (100 feet) to Japanese aircraft on Wednesday morning. He said the Chinese planes posed a danger to the Japanese aircraft and a serious incident could have occurred.

He said the Japanese planes were on a regular surveillance mission in international airspace, and that Japan would continue to defend its territory.

The two countries have increased patrols by ships and military planes to press their conflicting territorial claims in the East China Sea. They had a similar incident on May 24.

Tensions between the two Asian rivals worsened in recent years over a group of uninhabited islands in the East China Sea called Senkaku in Japanese and Diaoyu in Chinese. Japan controls the islands but China also claims them.

Japanese fighter jets were scrambled in response to foreign aircraft 810 times last year, more than half of them Chinese, according to a recent Defense Ministry report.

In Washington, U.S. State Department spokeswoman Jen Psaki said Wednesday all states should ensure they respect the safety of aircraft in flight.

“Any attempt to interfere with freedom of overflight in international airspace raises regional tensions and increases the risk of miscalculation, confrontation and unintended incidents,” she told reporters.