PH, 3 other gov’ts vow to crack down on poaching of marine turtles 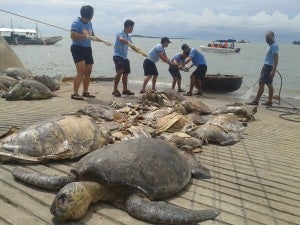 MANILA, Philippines—The governments of Indonesia, Malaysia, Vietnam, and the Philippines have pledged to enhance cooperation in the regional crackdown on the illegal trade in marine turtles in the rich waters of the Coral Triangle.

The commitment was made at a marine turtle trade workshop hosted by the Philippine government from June 3 to 4, according to the World Wide Fund for Nature (WWF) Philippines.

“With the ongoing issue of poaching of marine turtles, the country recognized the need for an integrated approach in addressing this challenge,” said Theresa Mundita Lim, director of the Biodiversity Management Bureau (BMB) of the Department of Environment and Natural Resources.

“The alarming trend over the decade justifies the need for neighboring countries to make transboundary arrangements and improve the protection between national governments,” said Lim in a WWF news release.

“Entire populations of marine turtles are being wiped out by persistent poaching, both targeted and as bycatch,” said Joel Palma, WWF-Philippines vice president for conservation.

“As foreign fishing fleets are often involved, such inter-governmental collaboration is essential to strengthen local and trans-boundary law enforcement efforts to prevent marine turtles from being poached and traded for use as food and luxury items,” Palma said.

The workshop came on the heels of a recent incident when Philippine authorities arrested Chinese fishermen off the coast of Palawan last month for carrying about 500 live and dead turtles in their boat.

The involvement of local fishermen in the incident “suggests a higher degree of organized supply and trafficking that requires a transnational response,” WWF-Philippines said.

The group said the incident was just one of several poaching and trafficking incidents happening not only in the Philippines but also in important marine turtle range countries of Indonesia, Malaysia and Vietnam, and across the wider Coral Triangle region.

The Coral Triangle refers to one of the most biologically diverse regions in the world bounded by the countries of Indonesia, Malaysia, Papua New Guinea, the Philippines, Timor Leste and the Solomon Islands.

It is home to 600 corals, comprising 76 percent of the world’s known coral species, and has the highest diversity of reef fish, with 2,500 species, or 37 percent of the planet’s reef fish concentrated in one area.

The Coral Triangle also hosts six of the seven known species of marine turtles including Green, Hawksbill, Loggerhead, Flatback, Olive Ridley, and Leatherback, according to WWF-Philippines.

“We need to halt the illegal turtle trade once and for all, otherwise, the work of protecting nesting beaches and feeding grounds will be futile if thousands of turtles are being wiped out at sea,” said Palma.

Turtles are used mainly for food, souvenirs, jewelry and ornamentation, and in some traditional medicinal systems, WWF-Philippines said.

The shells of Hawksbill turtles (known asbekko) have been carved into ornaments and jewelry for many centuries, particularly associated with Japanese traditional crafts, it added.

“Aside from local consumption of meat and eggs, the demand for marine turtle shell and other derivative parts from market destinations including mainland China and Taiwan, Japan and Vietnam is driving this trade,” said James Compton, TRAFFIC senior program director for Asia Pacific.

Research by TRAFFIC has identified the island province of Hainan as a major hub for the illegal trade in marine turtle products in China, and work over the past four years with Chinese government authorities and other local stakeholders has greatly increased the attention to market regulation and control, according to WWF-Philippines

“The need for inter-agency collaboration on this illegal trade is essential, including the navy and coast guards in a national task force approach, is essential to protect marine turtles in source countries,” added Compton. “Greater law enforcement effectiveness, including investigations and prosecution are important to increase deterrents against participating in wildlife crime.”

All international commercial trade in marine turtles is illegal under the Convention on International Trade in Endangered Species (CITES).

“This timely workshop shows that these source countries are paying attention to what’s happening to marine turtles around the region and that they all share the same challenges,” said Joel Palma.

“Since turtles are transboundary in nature, protecting them requires a more cohesive and integrated approach. This workshop is a major step towards that direction,” added Palma.