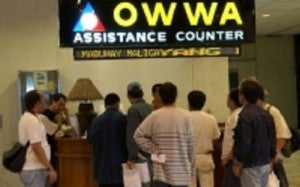 Calzado, who previously served as deputy executive director of the National Wages and Productivity Council, holds graduate and undergraduate degrees in Economics from the University of the Philippines, according to deputy presidential spokesperson Abigail Valte.

Dimzon said Calzado is well capable of taking on the job.

“She is a good choice since she is also from the Department of Labor and Employment,” Dimzon said.

Dimzon said she would not think twice about serving OFWs again if such opportunity is presented to her in the future.

“I’m open to another opportunity to serve, especially if it’s as challenging and exciting as the previous post I held,” she said.

“I never thought of it as a job. I enjoyed serving OFWs. I love helping them with their needs. It feels good to be able to help our countrymen,” she said.

Dimzon’s advice to Calzado: “Just enjoy the job. I assure her there is no dull moment in this post. It’s fun to serve OFWs because you can really see in their faces their gratitude and satisfaction derived from the services we give them,” she said.

OWWA not a GOCC, says administrator