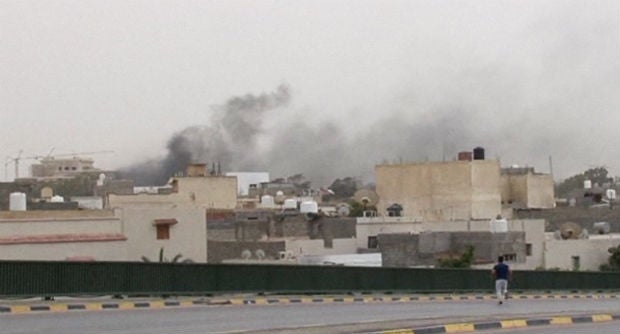 In this image made from video provided by the Libyan national army via AP Television, smoke rises over the parliament area after troops of Gen. Khalifa Hifter targeted Islamist lawmakers and officials at the parliament in Tripoli, Libya, on May 18, 2014. A total of 51 Filipinos have so far signed up for voluntary repatriation from Libya. AP PHOTO/LIBYAN NATIONAL ARMY

MANILA, Philippines–A total of 51 Filipinos have so far signed up for voluntary repatriation from conflict-stricken Libya while the Philippine government readied possible exit points for Philippine citizens in case air travel would no longer be viable.

Department of Foreign Affairs (DFA) spokesman Charles Jose said Tuesday that the Philippine Embassy in Tripoli has begun arranging for a flight home for the first batch of Filipinos who volunteered for the repatriation program.

“The situation is very volatile. It continues to deteriorate,” he said. He told Filipinos in Libya to avail themselves of the voluntary repatriation program. The government will shoulder all repatriation costs, he said.

He said documentation of the 51 Filipinos is being arranged and that they would be put on a flight home “as soon as possible.”

Air travel in and out of Libya still continues, but the government has identified possible alternatives in the event that the international airport in Benghazi is shut down, he said. These include land routes through Egypt and Tunisia and sea routes through Malta and Greece.

There are at least 13,000 Filipinos in Libya, most of them employed in the construction, oil, medical and service industries.

Jose said other Filipinos are still opting to stay as “they feel that they are safe there while nothing [major] is happening yet.”