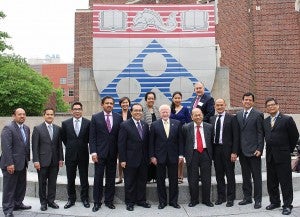 WASHINGTON, DC — The visit to Manila of a high-level business delegation from the United States led by Commerce Secretary Penny Pritzker underscores the growing international interest in the economic prospects of the Philippines, the Philippine Ambassador to the US said.

“The visit of Secretary Pritzer goes to show that the Philippines is in the radar screen of American investors,” Ambassador Jose L. Cuisia, Jr. said.

Secretary Pritzker who arrived in Manila on Monday, with and a delegation of senior American corporate executives will join the US-ASEAN Business Council in meetings with Philippine officials and business leaders as part of Washington’s efforts to strengthen partnerships with long-established trading partners like the Philippines.

Pritzker’s visit comes a few days after the successful conclusion of the 3rd Philippines Private Sector-Led Investment Roadshow led by Cuisia and noted Filipino economist Dr. Bernardo Villegas as part of economic diplomacy efforts being undertaken by the Philippine Embassy and the Consulates General in the US.

Cuisia said the roadshow, which was participated in by Alfredo Austria, President of DMCI; Rainerio Borja, President of Expert Global Solutions Philippines; Martin Pascual, Director of Pascual Laboratories; and Benjamin Philip Romualdez Jr., President of the Chamber of Mines of the Philippines, elicited positive response from corporate leaders, investors and officials in Houston, Atlanta and Philadelphia.

Among those who attended the business forums was US-based Filipino infotech engineer Jun Baldonado who said: “I thought all the opportunities for business process operations were only in Manila. Thanks to the roadshow I learned there were many other hubs in the country such as Calabarzon, Northern and Central Luzon, Western and Visayas, and Davao and General Santos.”

Baldonado said he and his brother, who is based in Singapore, have been thinking of setting up an IT business but could not agree on the location. “I think I can now convince him to look at Cebu, which like Davao City, Sta. Rosa, Laguna, Bacolod, Iloilo, and Baguio, is among the leading Philippine cities that host many BPO operations.”

Another attendee was Drake Nakaishi, Executive Director of Chester Economic Development Authority, who was surprised to learn that the Philippines is more than just a tropical archipelagic country.

“I am very impressed with this roadshow. The Philippines has a good solid message to share and it is amazing to see the commitment of the Philippine private sector in promoting the country,” Nakaishi said. “As experts in their fields and captains of their industries, the speakers engaged the audience and gave frank and balanced answers adding to the credibility of the roadshow.”

“The Philippines is indeed Asia’s emerging tiger. I heard many people who attended the forum express their interest in informing their clients more about opportunities in the Philippines,” he added.

The same view is shared by the US Department of Commerce, which said that Manila’s response to recent natural calamities has also helped renew American interest in doing business in the country.

“The economy in the Philippines has shown much resilience despite tragic natural disasters and volatile financial markets. Economic growth has been consistent during the last two years and is projected to remain so through 2016. Reconstruction efforts could lead to acceleration in the economy and present business opportunities for American companies with experience in sectors like construction and infrastructure,” the Department said.