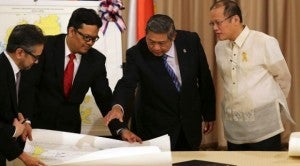 Indonesian President Susilo Bambang Yudhoyono, second from right, points at a map beside Philippine President Benigno Aquino III, right, during a signing ceremony at the Malacanang Presidential Palace in Manila, Philippines, Friday, May 23, 2014. The Philippines and Indonesia have signed an agreement resolving their sea border dispute after 20 years of negotiations as the leaders of the Southeast Asian neighbors vow to forge even closer ties. AP/Aaron Favila

President Benigno Aquino III and visiting Indonesian President Susilo Bambang Yudhoyono on Friday held up a new maritime boundary agreement between Indonesia and the Philippines as a rules-based model for resolving territorial disputes in the South China Sea.

On the final day of the outgoing Indonesian president’s two-day state visit, the two leaders witnessed the signing by their foreign ministers of an agreement defining the limits of their countries’ exclusive economic zones (EEZ) in the Mindanao Sea and Celebes Sea, ending a long-standing sea border dispute after two decades of negotiations.

They also signed agreements on cooperation on counterterrorism and higher education and vowed to forge closer ties.

Yudhoyono, who spoke out against “gunboat diplomacy” at the Association of Southeast Asian Nations (Asean) Leaders’ Summit in Burma (Myanmar) a few weeks ago, hailed the agreement as a model for resolving territorial disputes.

“This, indeed, is a model. A good example that any border disputes, including maritime border tension, can be resolved peacefully and not [through] the use of military might, which interferes and endangers stability and peace in our region or anywhere in the world,” he said.

Yudhoyono, who is in Manila also to attend the World Economic Forum on East Asia where he received the Global Statesmanship Award yesterday, voiced alarm over the growing disputes.

Tensions have flared in the South China Sea, which is believed to hold vast oil and gas deposits, with China embroiled in separate rows with Vietnam and the Philippines over the disputed waters.

Mr. Aquino called the border agreement a milestone “that is founded on the principles of international law, particularly the United Nations Convention on the Law of the Sea (Unclos).”

“It serves as solid proof of our steadfast commitment to uphold the rule of law and pursue the peaceful and equitable settlement of maritime concerns,” he added.

Foreign Secretary Albert del Rosario and his Indonesian counterpart, Minister Dr. R.M. Marty M. Natalegawa, signed the maritime border accord amid fresh irritants in Manila’s territorial dispute with Beijing in the South China Sea, which the Philippines refers to as the West Philippine Sea.

The Philippines has filed an arbitration case in a UN arbitral tribunal to resolve its territorial disputes with China.

The Philippines in early April protested China’s reclamation of land on Mabini Reef (Johnson South Reef) in contested waters in the West Philippine Sea. Beijing rejected the protest, claiming the reef was part of its territory.

In a statement, the Department of Foreign Affairs (DFA) explained that the EEZ agreement with Indonesia was forged in accordance with international law, including the 1982 Unclos and the state practice and decisions of international tribunals on maritime boundary delimitation.

In essence, it is the result of a rules-based negotiation to peacefully resolve maritime issues between two archipelagic states, the DFA said.

“This is the first maritime boundary treaty of the Philippines. The EEZ boundary line defines the limits of the sea space in the southern Philippines thereby giving our fishermen and other stakeholders a clear extent of the area where they can exercise the sovereign rights over the waters as provided for by national laws and treaties, including the 1982

The EEZ boundary will boost the government’s efforts to enforce Philippine fishing, maritime and security laws, it added.

Under international law, countries have EEZs extending 370 kilometers from their coasts that give them rights to resources in those waters. But these zones can overlap between neighboring countries.

China, the Philippines, Vietnam, Brunei, Malaysia and Taiwan have conflicting claims to parts of the South China Sea.

The Philippines and Vietnam have repeatedly expressed concern and more recently anger at what they perceive as increasingly hostile Chinese efforts to assert China’s claim over the disputed areas.

China is also engaged in a worsening dispute with Japan over islands in the East China Sea that has severely damaged relations between Asia’s two biggest economies.

Referring to the recent surge of conflicts in the South China Sea, the Indonesian leader said any tension “must be resolved peacefully without the use of military force.”

He called on China and Southeast Asian nations to “return to the spirit” of a 2002 nonaggression pact between the  Asean and Beijing in which they said they would not take any actions that raised tensions in disputed areas.

Yudhoyono said the DOC should now become a code of conduct “by which we can refer to international law.”

The Asean is now discussing a more binding code of conduct in the South China Sea  to take the place of the DOC that has failed to stop clashes in the waterway. But China is balking at the idea.

“Therefore, it is my view that it is time that we invite, we call upon all parties who have an interest to maintain order, to maintain stability in our region. They should return to the spirit that we have agreed upon and that we have in possession,” Yudhoyono said.

Mr. Aquino said he and Yudhoyono agreed in pushing for Asean’s key principles to maintain peace and stability in the region.

“Indonesia and the Philippines will continue to work hand in hand in creating a truly inclusive Asean, in advocating for the primacy of the rule of law to help maintain peace and stability in the region, and in empowering our peoples to be partners in building our respective nations and the Asean community,” he said.

He said the agreements signed during the Indonesian president’s visit “without a doubt … reflect the strong resolve of both our nations to not only deepen our bilateral engagements, but also, and more importantly, enable our peoples to be true partners in achieving prosperity”.

After what he called “productive talks,” Mr. Aquino said he and Yudhoyono looked forward to the realization of the Asean economic integration and to boosting trade and cooperation in other areas.

In 2013, Indonesia ranked as the Philippines’ 11th largest trading partner, with bilateral trade estimated at $3.51 billion. It hosts a Philippine community numbering almost 10,000.

“We both share the belief that much more can be done to maximize the prospects of equitable growth. In this regard, we took note of the commitment in the plan of action to double bilateral trade by 2016,” Mr. Aquino said.

“We both agreed that we will prepare a forum. A forum so that the community of business between our two countries, Indonesia and the Philippines, can sit together in a few months to come so they can discuss more opportunities, be that in the Philippines or Indonesia, so those business people can enhance the investment, enhance the trade between our two countries,” he said.

With a deal delimiting their respective EEZ in the sea borders, Yudhoyono said both countries could work “even closer” in fisheries, transnational crimes and eco-tourism.

Since the two countries are vulnerable to a warming climate, Mr. Aquino said they agreed on the need for “enhanced cooperation” and a “firm resolve” to adopt sustainable development for Filipinos and Indonesians.

“We have enhanced connectivity, we have motivated local economy, we have established local sector transport and the tourism industry. Therefore, we want to further enhance this cooperation, utilizing this BIMP-EAGA, inviting the business community, empowering the local communities so that they may become more proactive,” the Indonesian president said.

Yudhoyono congratulated the Philippines for the “synergy of the Filipino economy” and the landmark deal with Muslim rebels to carve out a new, autonomous Bangsamoro region in southern Philippines.

“That indeed is an important key milestone in history that any conflict, any conflict can be resolved peacefully,” he said. With a report from AFP