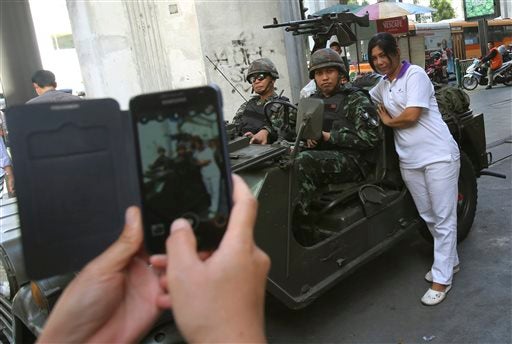 MANILA, Philippines—The Department of Foreign Affairs (DFA) on Tuesday advised Filipinos in Thailand to prepare for evacuation “if necessary” and stay away from public places following the declaration of martial law in the Southeast Asian country.

The DFA issued Alert Level 2 (restriction phase) to the estimated 15,000 Filipinos in Thailand, advising them to avoid public areas.

The foreign office is also sending to Bangkok an emergency response team led by a senior official at the “soonest possible time” to check on the situation and ensure the protection of Filipinos there, said DFA spokesman Charles Jose.

“Alert Level 2 is issued when there are real threats to the life, security and property of Filipinos arising from internal disturbance in or external threat to the host country,” Assistant Secretary Jose said in a press briefing Tuesday.

“Under Alert Level 2, Filipinos in Thailand are instructed to restrict nonessential movements, avoid public places and prepare for evacuation if necessary,” he said.

Under the alert level, the Philippines is suspending the deployment of new hires to Thailand. Only overseas Filipino workers with existing contracts may fly back there while Alert Level 2 is in effect.

“The Philippine Embassy in Bangkok advises Filipinos residing in or traveling to Thailand to avoid the rally sites and large gatherings and to refrain from taking part in the protest or other political activities. Everyone is advised to continue exercising extreme caution and vigilance and to closely monitor developments,” Jose said.

He said the Philippines “hopes for an early return to normalcy consistent with the will and interest of the Thai people.”