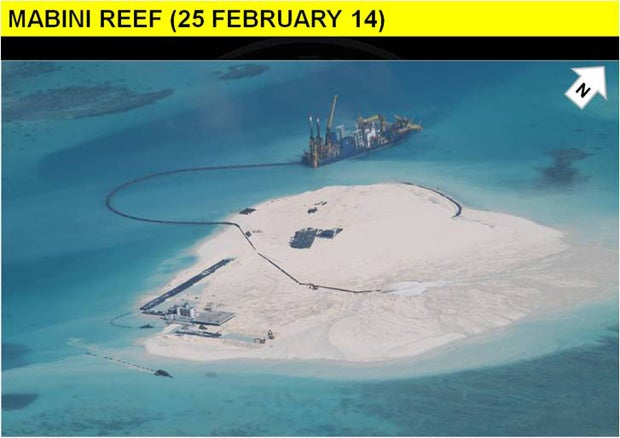 MANILA, Philippines—China’s reclamation of land on Mabini Reef (Johnson South Reef) in the West Philippine Sea is a progressive undertaking and is likely for military use, the Department of Foreign Affairs (DFA) said on Thursday.

Military surveillance pictures the DFA released showed the “dramatic transformation” of the reef 333 kilometers off Palawan province: From an outpost in March 2012 to a larger concrete structure by March 2013 to an island “hectares” in size today.

One of the pictures shows a long pipe connected to a large dredging vessel on the northwestern edge of the reef. A concrete building, likely to be China’s outpost on the reef, stands on the southern edge of the emerging islet. A ship is anchored nearby.

“It’s a series and you’ll see the progression, the stages of the reclamation work that China has been doing on Mabini Reef,” DFA spokesman Charles Jose told a news briefing.

“You’ll see the dramatic transformation of Mabini Reef starting from 2012 when there was a small outpost, then by 2014 the reclaimed land is already a big area,” he said.

“The photos were taken from the air, so there’s no physical measurement of the reclaimed land. So we can just estimate according to intelligence reports that it has [expanded to] hectares. We’re not talking about square meters but hectares,” Jose said, adding that China could be dredging sand from areas not far from the shoal to build an islet.

The aerial photographs were accompanied by a caption stating that they were obtained from “Philippine intelligence sources.” The caption said the “extensive reclamation” by China on Mabini Reef, called Chigua Reef by China, was “destabilizing.”

On the same day, Foreign Secretary Albert del Rosario said the Philippines protested China’s action on April 4, but Beijing rejected the protest on grounds that Mabini Reef was part of Chinese territory.

The Chinese Embassy in Manila had no immediate comment, but Chinese foreign ministry spokesperson Hua Chunying told a news briefing in Beijing on Wednesday that the reef was part of China’s territory and any construction there was covered by its “sovereignty rights.”

China claims 90 percent of the 3.5-million-square-kilometer South China Sea, including waters within the exclusive economic zones of the Philippines, Brunei, Malaysia, Vietnam and Taiwan.

The Philippines is questioning China’s extensive claim in the United Nations International Tribunal for the Law of the Sea in The Hague, the Netherlands, in an arbitration case that has made China more aggressive in asserting its claims in Philippine waters in recent months.

Manila’s case includes a request for the clarification of the “physical character” of Mabini Reef, part of the Kalayaan Islands in the Spratly archipelago that the Philippines administers from Palawan.

Jose explained that the Philippines wanted to clarify whether Mabini was a rock formation or an island. This is important, he said, as features above water are a territorial, not maritime, issue in which states can raise claims.

Vietnam also claims Mabini Reef, but China seized it from Hanoi after a deadly naval skirmish between Chinese and Vietnamese ships in 1988.

Del Rosario on Wednesday said that it was not clear what China was building on the reclaimed land on the reef, but that an airstrip was a possibility.

“Judging by the size of the reclamation work that they’re doing there, we can come up with several possibilities, and one of them is to construct an airstrip. So that’s a possibility, but we can only speculate on that,” Jose told reporters yesterday.

“Judging from the other structures put up by China in the South China Sea, we can safely presume they’re for military purposes. Like their structures on Mischief Reef (Panganiban Reef), it’s a military garrison. So we can assume that this will have a military purpose,” he said, referring to another part of the Spratlys also claimed by the Philippines.

A senior government official, speaking to The Associated Press on condition of anonymity because he was not authorized to talk about the controversy, said it could also be used as a military base and a resupply and refueling hub.

The official said the reclamation, now about 30 hectares, was first detected by Philippine Air Force surveillance planes six months ago.

An airstrip or a military base on the reef would boost the mobility of Beijing’s naval and air forces in the South China Sea region, far from the Chinese mainland.

“We think this is destabilizing because it violates the provisions of the (Declaration on the Conduct of Parties in the South China Sea), which says parties should exercise self-restraint and not take actions that could complicate and escalate the situation in the South China Sea,” Jose told reporters on Thursday.

Asean signed the nonaggression pact with China in 2002.

Jose also scored China’s inconsistencies, citing its blocking a Philippine resupply mission to Ayungin Shoal (Second Thomas Shoal) in the West Philippine Sea on March 9, accusing the Philippines of carrying construction materials to the country’s longtime outpost in the Spratlys.

China harassed a second resupply mission 20 days later, but with assistance from fighter planes from the US Pacific Command, the Philippine vessel outsmarted the larger Chinese Coast Guard ship and successfully restocked and rotated the Marine garrison on the BRP Sierra Madre on Ayungin Shoal.

“We’re saying China is inconsistent because, on the one hand, it blocked our vessels from reaching Ayungin Shoal because it’s claiming we were carrying construction materials and trying to reinforce and improve our facilities there—which is not true,” Jose said.

“It turns out they’re the ones doing reclamation work on Mabini Reef,” he said.—With reports from AP and AFP