Biden cautions China in its dispute with Vietnam | Global News

Biden cautions China in its dispute with Vietnam 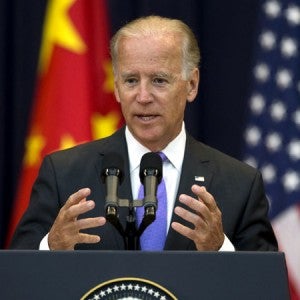 WASHINGTON — Vice President Joe Biden is conveying America’s objections about China’s behavior in a territorial dispute with Vietnam to the top brass of the Chinese military.

Biden told Fang the U.S. doesn’t take a side in the territorial confrontation between the two countries over an area in the South China Sea. That’s where China has triggered protests in Vietnam by deploying an oil rig in the long-disputed seas. One person has been killed, a Chinese worker in Vietnam.

But Biden says no nation should take provocative steps in the conflict that undermine stability and peace.