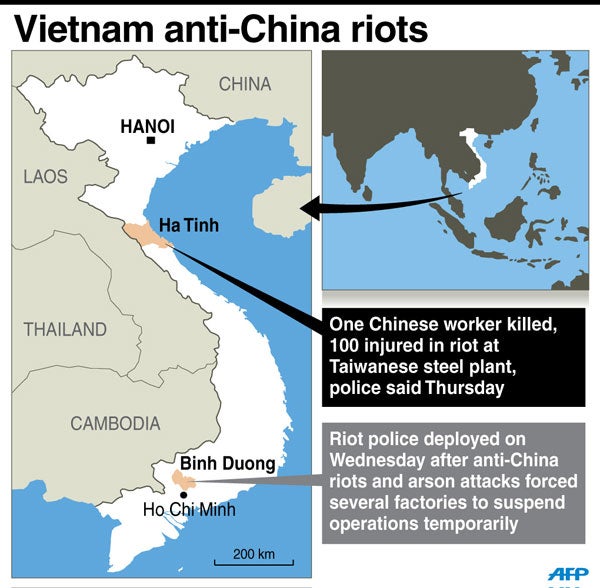 BEIJING — China has issued a warning to tourists planning trips to Vietnam, as state-run media on Thursday blamed Hanoi for encouraging the country’s worst anti-Beijing riots in decades, which saw a Chinese worker killed.

Anti-China protesters set more than a dozen factories on fire in Vietnam on Wednesday in response to Beijing’s deployment of an oil rig in waters contested between the two nations.

China’s tourism administration said in a notice on its website Wednesday that any Chinese planning to visit Vietnam should “carefully consider” their plans, and called for visitors to “raise their consciousness of danger”.

Meanwhile, China’s state-run Global Times newspaper said in an editorial that the riots — which saw at least 15 factories set ablaze — were “the outcome of Hanoi’s years of anti-China propaganda”.

“China’s over-tolerance must not test China’s patience beyond the limit,” the paper said, adding that Vietnam should compensate foreign investors.

A Chinese worker was killed in a riot at a Taiwanese plant, a local policeman told AFP on Thursday.

A commentary carried by China’s official Xinhua news agency said that with “an unconfirmed number of Chinese citizens… reportedly dead or missing, Hanoi faces the urgent task of demonstrating to the outside world that it is serious about protecting the legitimate rights of foreign nationals in the country”.

Calling the attacks “senseless,” the commentary said Vietnam must “maintain law and order in those areas hardest-hit by violence”.

Police detained 500 people after struggling to cool tensions when the country’s Communist rulers — who usually tightly control dissent — allowed rallies against Beijing at the weekend.

China and Vietnam are locked in long-standing territorial disputes in the South China Sea over the Paracel and Spratly islands, which both claim.

There have been repeated skirmishes near the controversial oil drilling rig in recent days involving vessels from the two countries, with collisions and the use of water cannon.

Beijing claims almost the entirety of the South China Sea, putting it at odds with several of its Asian neighbors.