PH has backing of Vietnam, Malaysia vs China’s sea claims 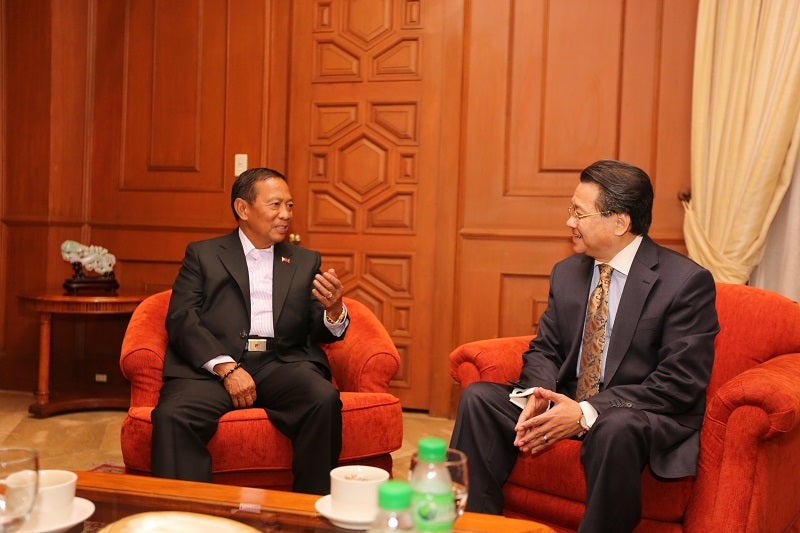 Vietnamese Ambassador Truong Trieu Duong (right) expresses support for the Philippines in its maritime dispute with China in the West Philippines Sea in a courtesy call to Vice President Jejomar Binay on Tuesday. Photo courtesy of the Office of the Vice President

MANILA, Philippines — Vietnam and Malaysia are supporting the Philippines in its maritime dispute against China in the West Philippine Sea, Vice President Jejomar Binay said in a statement Thursday.

Vietnam Ambassador Truong Trieu Duong expressed support for the Philippines against China’s claims during a courtesy call to Binay on Tuesday.

Duong also told Binay that “Malaysia is keen to join us.”

He sees that the recent incident where Chinese Coast Guard vessels used water cannons to drive away Filipino fishermen from Bajo de Masinloc, also known as Panatag or Scarborough Shoal, can also happen to Vietnamese fishermen.

Vietnam is locked in a maritime dispute with China over the Paracel Islands where a military engagement in 1974 left at least 70 people dead and forced Vietnam to leave the islands.

Binay said that a “solid stand” of the Association of Southeast Asian Nations (Asean) is needed to stand up against the aggressive claims of China.

“As long as we are solid in Asean, [we have a strong case on our territorial claims],” Binay said in the statement.

China claims the entirety of the South China Sea including portions of the Philippines’ and Vietnam’s 200 nautical mile exclusive economic zone (EEZ).

The Philippines has a pending arbitration case against China’s maritime claims with the International Tribunal on the Law of the Sea.

Vietnam also has claims to several maritime features in the Spratly group of islands, along with Malaysia, Brunei, Taiwan, China, and the Philippines.

Solicitor General Francis Jardeleza said in a previous forum in the University of the Philippines that Vietnam and Malaysia can help boost the case in the international tribunal by becoming a party to the Philippines’ case or filing their separate case against China.

The Department of Foreign Affairs (DFA) however has not confirmed whether any formal communication asking Vietnam and Malaysia to join the case has been made.