UP, UST rank up among Asia’s Top 300 universities 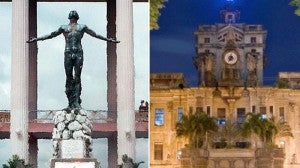 MANILA, Philippines – The University of the Philippines (UP) and University of Santo Tomas (UST) posted higher rankings in the 2014 list of Asia’s Top 300 Universities compiled by the British company Quacquarelli Symonds.

UP’s ranking went up four places from 67 last year to 63 in 2014 after scoring 58.70. Although the university had high scores in academic and employer reputation, it had dismal scores in terms of inbound and outbound exchange.

UP President Alfredo Pascual said in a statement that the improvement in the university’s scores could be attributed to “efforts to increase funds and incentives for research, upgrading our facilities and laboratories, proving support for PhD and Master’s scholarships, recruiting faculty through the Balik-PhD Program and Visiting Professors Program, giving greater incentive for honor graduates to teach in UP, and pursuing internationalization.”

The statement said it was UP’s highest ranking since 2011.

Meanwhile, UST ranked 141 with a score of 42.4, an improvement of nine places from its 150th rank in 2013. The institution ranked 12th in Asia in terms of citations per paper. However, it also had low scores when it came to papers per faculty, inbound exchange and outbound exchange.

From top 109, AdMU’s ranking dipped to 115 this year as it posted lower scores in inbound and outbound exchange. This is amid the school’s improved employer reputation.

AdMU’s sister school Ateneo de Davao University entered the 251-300 bracket this year, replacing the University of Southeastern Philippines (also in Davao), which ranked 251-300 last year, as the fifth local institution to be included in the list.

The National University of Singapore (NUS) is the top university in Asia with a score of 100. In 2013, it tied with the University of Hong Kong for the second spot.

The Korea Advanced Institute of Science & Technology (KAIST) ranked second with a score of 99.5. It was sixth in 2013.

UP among best universities in Asean

Only 5 in PH make list of Asia’s top universities