Asean must have social protection–NTSP 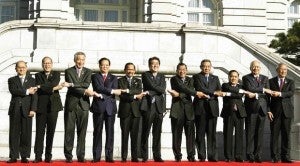 MANILA, Philippines – Asean integration must center on people and their needs, not on business and profits, the Southeast Asia-wide Network for Transformative Social Protection said Monday after leaders of the 10 Asean countries meet in Myanmar this weekend.

“The 2015 Asean integration is supposed to benefit the sub-region’s more than half-a-billion people. But Asean political decision makers are largely focused on the establishment of a common market and have involved mainly corporate interest groups. They have neglected the social dimension of integration,” the NTSP said in a news release.

As a result, most Southeast Asians will continue to live in poverty and inequality despite record economic growths in booming Asia, said the network of progressive Asian-based NGOs, people’s organizations, academics, think tanks, unions, sectoral groups, and parliamentarians.

In particular, the Asean integration process lacks implementing programs and defining role of labor and other social partners, the NTSP said.

“How will the Asean goals of equitable economic development and reduction of poverty and socio-economic disparities be met without the people?” asked Rene Ofreneo, former dean of the University of the Philippines’ School of Labor and Industrial Relations.

“Worse, the full-blown implementation of the neo-liberal policies will deepen the Race to the Bottom, resulting in lower wages, worse working conditions, and fewer environmental protections,” Ofreneo said at a recent dialogue in Kuala Lumpur organized by Friedrich Ebert Stiftung and the Asia-Europe People’s Forum in cooperation with the NTSP, Monitoring Sustainability of Globalization, and Global Social Justice.

Charles Santiago, a member of parliament of Malaysia, said most of the trade agreements give primacy to investor confidence, but are silent on labor issues even as workers increasingly need to be protected against subcontracting and contractualization that have become the norm in many Asean countries.

The NTSP thus called on Asean to flesh out the Asean Declaration on Strengthening Social Protection adopted October 2013 which adheres to the principle that “Everyone […] is entitled to have equitable access to social protection that is a basic human right and based on a rights-based/needs-based/life-cycle approach and covering essential services as needed.”

The Network for Transformative Social Protection is calling for nationwide and globally funded social protection systems that ensure a life of well-being and dignity, with rights to work, livelihood, basic social services, and social security — all deemed as part of the social commons, or essential things that support humanity and that must be safeguarded and reclaimed like water, education, health services, etc.

Asean integration not happening in 2015

The ABCs of preparing for the Asean integration