Only 5 in PH make list of Asia’s top universities 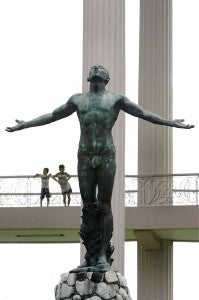 UP BY A NOTCH University of the Philippines now ranks 67th. RAFFY LERMA

Only five of the country’s universities, led by the University of the Philippines (UP), made it to this year’s list of top 300 Asian universities ranked by Quacquarelli Symonds (QS).

This was the lowest number of Philippine universities to make the cut since QS began ranking universities in Asia in 2009.

Last year, 14 of the country’s own made it to the list of Asia’s top universities, according to QS.

UP’s ranking went up by a notch—to 67th—in the 2013 QS University Rankings for Asia released on Tuesday.

This year Ateneo de Manila University was ranked 109th, down from its 86th ranking last year.

The University of Southeastern Philippines remained in the 251-300 range, where it was last year.

UP, Ateneo, La Salle and UST have consistently made it to the QS list of top Asian universities since the rankings began in 2009.

They were in the 301-plus rank last year.

QS ranks universities worldwide according to nine indicators, mainly based on reputation and research citations.

QS said it used a “slightly different” methodology from the one it used for the annual QS World University Rankings to “reflect the region’s different priorities.”

This year’s top Asian universities were the same as last year.