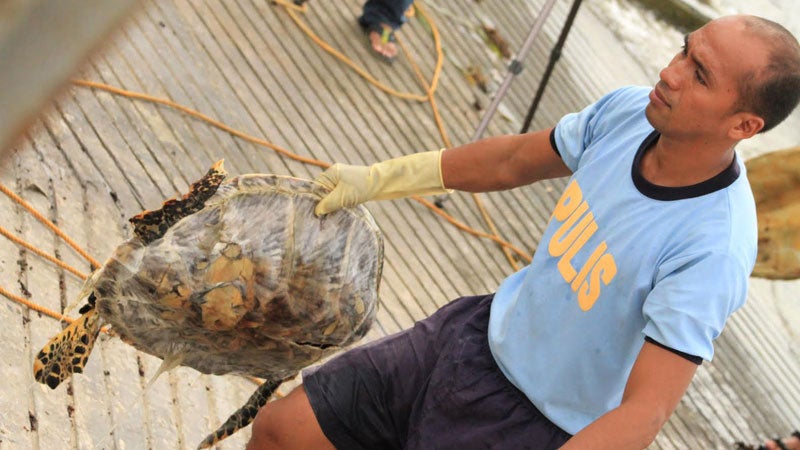 In this photo taken Saturday, May 10, 2014, a Philippine National Police Maritime Group officer holds a dead green sea turtle as he unloads them from the Chinese vessel Qiongqionghai 09063 at Honda Bay Wharf in Puerto Princesa city. On Monday, May 12, 2014, the Philippines charged nine Chinese fishermen with poaching more than 500 endangered sea turtles at a disputed South China Sea shoal despite China’s demand for them to be immediately freed. AP PHOTO

MANILA, Philippines—Palawan prosecutors on Monday charged nine of the 11 Chinese fisherman caught poaching marine turtles off Hasa-Hasa Shoal (Half Moon Shoal) in the West Philippine Sea last week, according to the Department of Justice (DOJ).

Two of the 11 poachers were found to be minors and were not charged in accordance with Philippine laws.

Bail of P30,000 was set for each fisherman for poaching and P40,000 for taking endangered species.

The Chinese fishermen face up to 20 years in prison and large fines if found guilty.

Poaching is punishable by fines of up to P5 million.

Rodriguez said the inquest was held despite the absence of lawyers for the Chinese fishermen.

The fishermen refused to be represented by the lawyers sent by the Public Attorney’s Office and insisted that they were not covered by Philippine laws because they were fishing in Chinese waters, Rodriguez said.

Rodriguez said two representatives from the Chinese consulate came to see him on Monday morning and told him that the fishermen were in Chinese territory when they were arrested.

“I advised them to present their assertion in the preliminary investigation but they chose not to. The [Chinese fishermen] were not even represented by their lawyer,” Rodriguez said.

In the absence of legal representation for the Chinese fishermen, Rodriguez said he resolved to send the case to court for trial based on the report and evidence submitted by the Philippine National Police Maritime Group.

“It’s their right not to get a lawyer and not to recognize our authority. They can raise that argument in a full-blown trial in court,” Rodriguez said.

The rules of criminal procedure permit the holding of an inquest even if the respondents have no lawyer, he said.

Rodriguez said he expected the Palawan Regional Trial Court to issue a commitment order for the transfer of the Chinese fishermen from the PNP provincial headquarters to the provincial jail.

A PNP Maritime Group patrol seized the Chinese fishermen’s boat, the 15-ton Qiongquionghai 09063, at Hasa-Hasa Shoal on May 6 and detained the crew after finding more than 500 marine turtles aboard the vessel.

The authorities towed the boat to the port of Puerto Princesa City.

Fisheries and environmental officials found more than 300 of the turtles dead. They returned the live turtles to the sea on Saturday.

Claiming “undisputed sovereignty” over 90 percent of the 3.5-million-square-kilometer South China Sea, including the West Philippine Sea, China demanded the immediate release of the fishermen and the return of their boat.

The court case is the latest step in the simmering dispute between the Philippines and China over territory in the West Philippine Sea.—With reports from Redempto D. Anda, Inquirer Southern Luzon, and AFP