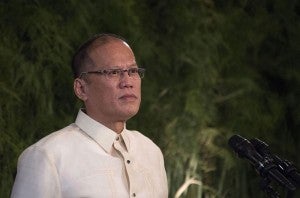 NAYPYIDAW, Burma—China might think twice about deploying an oil rig in the West Philippine Sea because of a new security agreement between the Philippines and the United States, President Aquino said on Sunday night.

Aquino was referring to China’s moving a deepwater drilling rig to the East Sea, the waters within Vietnam’s 370-kilometer exclusive economic zone, sparking confrontations between dozens of Chinese and Vietnamese ships last week.

Security analysts said China’s decision to park the rig in the East Sea might have been its response to US President Barack Obama’s tour of Asia in late April to assure allies in the region of the United States’ defense commitment to them.

Obama assured the Philippines and Japan, both locked in territorial disputes with China, that the United States would defend them if they were attacked.

Aquino said the Enhanced Defense Cooperation Agreement (Edca), signed hours before Obama’s arrival in Manila on April 28, could deter China from bringing an oil rig to the West Philippine Sea.

That extensive claim has set China against Vietnam, Brunei, Malaysia and Taiwan, which, like the Philippines, also claim parts of the sea where a third of annual global cargo passes and where islands, islets, reefs and shoals are believed to be sitting atop vast energy and mineral reserves.

The Philippines has opened oil and natural gas concessions in the West Philippine Sea, drawing warnings from China, including threats of taking over the islands administered by Manila in the Spratly archipelago.

But with the new defense agreement that allows US forces expanded access to Philippine military bases and to preposition fighter jets and ships, Aquino said China might think twice before making any moves in the West Philippine Sea.

“At the very least, it will be a factor that they will have to consider,” he told reporters here before flying back to Manila after attending the Association of Southeast Asian Nations (Asean) summit. He also expressed confidence that the agreement would stand scrutiny in the Supreme Court.

Aquino said the Philippines had been seeing a preview of China’s ultimate intentions in the West Philippines Sea.

The President said that after seizing Panatag Shoal (Scarborough Shoal) in 2012, China blockaded Ayungin Shoal (Second Thomas Shoal) in late March to cut supplies to a small Filipino garrison quartered on a rusting Navy ship that Manila grounded on the reef in 1999 to mark Philippine territory.

The last attempt by the China Coast Guard to block a Philippine resupply vessel was on March 29, a day before the Philippines was to submit evidence to the United Nations International Tribunal for the Law of the Sea that Manila had asked to nullify China’s claims to territories in the West Philippine Sea.

With assistance from the US Pacific Command, the Philippine resupply vessel outmanuevered a large China Coast Guard ship and slipped through the blockade, reaching the shoal to restock and rotate the Marine garrison aboard the BRP Sierra Madre.

Aquino said there used to be three Chinese ships blocking the access to the Sierra Madre but now there were five.

At Panatag, Aquino said the Chinese blockade would not allow Filipino fishermen near the shoal or even to take shelter there during storms.

At the Asean sessions on Sunday, Vietnam protested China’s “extremely dangerous action” in the East Sea and the Philippines reported China’s incursions into Philippine waters.

Aquino also briefed his Asean counterparts on the evidence submitted by the Philippines to the UN arbitral tribunal in The Hague, the Netherlands, to support its petition to nullify China’s claims in the West Philippine Sea.

The idea, he said, was to push for the upholding of the rule of law to ease tensions in the South China Sea.

At the close of their summit, the Asean leaders urged countries not to take actions that would escalate tensions in the South China Sea.

“We express serious concerns over the ongoing developments in the South China Sea,” the leaders of the 10 Asean countries said in their joint statement, a thinly veiled rebuke to China but without explicitly pointing the finger at Beijing.

The Asean leaders called on all parties involved to “exercise self-restraint, not to resort to threat(s) or use force and to resolve disputes by peaceful means in accordance with the universally recognized principles of international law.”

The statement “represents a slight tightening of Asean’s position,” Vietnam expert Carl Thayer said, adding that it suggests a rare level of “consensus” on the vexed sea rights issue.

But “the fact that no party was mentioned—conspicuously China—is standard Asean fare,” he said.

Vietnam lobbied energetically at the summit for a strong statement on the maritime disputes from its regional neighbors.

China responded on Monday, warning that Hanoi’s efforts to garner support over its territorial dispute with Beijing in the East Sea would fail.

“The facts prove that Vietnam is trying to rope in other parties and put pressure on China, [but] will not achieve its aims,” China’s foreign ministry spokesperson Hua Chunying told a daily news conference in Beijing.

“We hope that Vietnam can see the situation clearly, calmly face up to reality and stop harassing the Chinese operations,” Hua said.

She said the press should not hype up the situation. China and Asean “have the ability and determination to jointly maintain regional peace and stability,” she said.

Arriving in Manila before dawn on Monday, President Aquino reported that his meetings with other Asean leaders on a host of issues, such as regional stability, security, integration and climate change, were “fruitful.”

“Together with other members of Asean, we were able to map out a strategy to ensure the development of the region. We also put emphasis on the importance of unity and restraint in addressing issues of security, the marginalized sectors, climate change and territory,” he said.

“Indeed, the challenge facing a member state is a challenge facing the entire Asean. Only through collective action can we achieve a lasting solution that respects the interests and rights of each member,” he added.

Aquino thanked the summit host, Burmese President Thein Sein, and other Asean leaders for supporting his call to respect and fully implement the Declaration on the Conduct of Parties in the South China Sea.

The nonaggression pact was signed by Asean and China in 2002 but has failed to stop clashes in the South China Sea.

In a follow-up to agreements for respect for the rule of law at the Asean summit here, police chiefs from the bloc are meeting in Manila for discussions on regional peace and security matters.

Philippine National Police Director General Alan Purisima said the Philippines’ sponsorship of the 34th Asean Association of Police Chiefs (Aseanapol) was a “gesture of our firm commitment to regional peace and security under the spirit of Asean solidarity.”

President Aquino will speak at the opening of the annual Aseanapol meeting at Sofitel Philippine Plaza Manila on Tuesday.

“The conference comes as a most wonderful opportunity for the Asean law enforcement community to highlight the need for stronger international cooperation against highly technical criminal activities,” Purisima said.—With reports from Marlon Ramos and wires