Marcos on Edca: Not a good deal for PH in exchange for US access | Global News
Close
menu
search 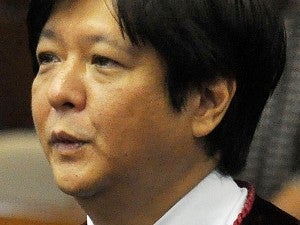 MANILA, Philippines — The Enhanced Defense Cooperation Agreement (Edca) between the Philippines and United States (US) is not a good deal for the Philippines, Senator Ferdinand Marcos Jr. said Tuesday during a hearing.

“We are not getting a good enough deal for giving them access,” Marcos said after questioning what benefits EDCA will have on the country.

He also questioned the premise that the Philippines would own whatever infrastructure the US military will build by citing Article 5 Paragraph 2 which states that the Philippines and US will “consult regarding the terms of return of any agreed locations, including possible compensation for improvements or construction.”

“If they will put up runways, they will be the ones using it, they put it up for themselves. We might even have to pay for what they put up when they return it to us,” said Marcos, a member of the committee on national defense and security.

He pointed out that the agreement “lacks detail” and “lacks precise conditions” and asked when the specifics, possibly in “annexes,” will be available.

Marcos said that the vagueness of the agreement was what fueled speculation about the Edca being rushed in time for the visit of US President Barack Obama.

Not quite a base, but US has full access to AFP camps