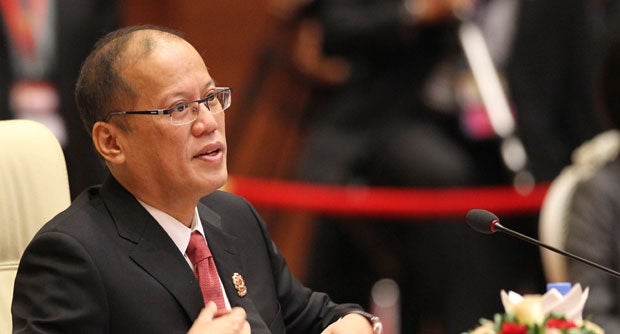 President Benigno S. Aquino III participates in the exchanges during the 24th ASEAN Summit Plenary at the Ruby Hall of the Myanmar International Convention Center-1 (MICC-1) on Sunday (May 11, 2014). Photo by Ryan Lim / Malacañang Photo Bureau

NAYPYITAW, Burma—President Benigno Aquino III on Sunday held up the Philippine government’s peace agreement with Moro rebels as a model for conflict resolution in the region, but called for rehabilitation of the survivors.

Myanmar President Thein Sein hailed the Comprehensive Agreement on Bangsamoro (CAB) as a “great achievement’’ when he opened the summit of the Association of Southeast Asian Nations (Asean) here.

“This recent success of the Philippines motivates us to share our insights on peace, conflict resolution, and reconciliation with our esteemed colleagues in the Asean,’’ he said at the plenary session on Asean integration.

After all, he added, “Peace in any part of the world redounds to the benefit of all.’’

With peace on the ground, stability, inclusivity and progress follow, and “more doors of opportunity’’ open for southern Philippines, the country, and partners and friends, Mr. Aquino said.

In the next 15 months, negotiators on both sides cobbled together the annexes on transitional arrangements and modalities; revenue-generation and wealth sharing; power sharing, and normalization.

Together with the 2012 framework agreement, the annexes form the comprehensive agreement.

Mr. Aquino declared that the successful peace talks would contribute to Asean’s “growing experience’’ and best practices in promoting a culture of peace and respect for diversity.

“Included in our work to establish a strong, stable, and peaceful Asean Community is the task of building on the values and best practices of our institutions in addressing intra, inter, and regional conflicts,’’ he said.

And with peace as a “fundamental concern’’ of all, Mr. Aquino said sharing best practices “allows us to address problems and challenges more comprehensively.’’

Mr. Aquino expressed the hope that the CAB would “add to the body of experience’’ that could inform conflict-resolution practices in Asean.

After all, peace in the Bangsamoro region would lay the foundation of stability, inclusivity, and progress in Mindanao, and open more doors of opportunity for the Philippines and its neighbors, he added.

In his opening statement, U Thein Sein, chair of Asean this year, called the leaders’ attention to positive developments in the region.

“The signing of the Comprehensive Agreement on the Bangsamoro in the Philippines on 27 March 2014 is a great achievement,’’ he said, drawing applause.

“All Asean member states extend their full support for the efforts to achieve lasting peace in Mindanao,’’ he added, as he congratulated Malaysia, Indonesia and other countries for contributing to the achievement.

Mr. Aquino, however, urged Asean to go beyond research and capacity-building, and consolidate narratives of peace, distill its lessons “to forge a consensus’’ and institutionalize “habits of peace-building.’’

“We believe that documenting Asean’s wealth of experience in conflict resolution and preventive diplomacy can guide all of us in building a stronger, more peaceful, and more stable Asean community,’’ he said.

But more important, Mr. Aquino said the Asean should be concerned with the recovery and rehabilitation of survivors of conflict situations, especially mothers and children who bore the “disproportionate burden’’ during conflicts.

“Let us always remember that our efforts do not, and should not, end with the cessation of hostilities and the signing of agreements. Peace is built every day, through all of our individual actions,’’ he said.

“The signing of the Framework Agreement on the Bangsamoro was the first such occasion that Chairman Murad’s wife had ever visited our capital, Metro Manila. Both of them had witnessed many years of conflict—years during which Chairman Murad and his companions had to isolate their loved ones in special communities to protect them from the ravages of conflict,’’ he said.

Citing the key role of women in the peace talks, the President proposed the promotion of gender mainstreaming in peace-building, peace process and conflict resolution.

Mr. Aquino said the government chief negotiator was a woman, referring to Miriam Coronel-Ferrer, and half of the members of the government’s negotiating team were women.

“This example only highlights the prominence of women in Filipino society — where they are empowered to take part in all aspects of nation-building,’’ he said.

“Perhaps we can all agree that women and children are traditionally and historically the least consulted, but also the most affected sectors during times of conflict,’’ he said.

“As mothers, women look at violence not only as a conflict between groups, but also in how violence can affect or influence their children and their family. In this light, then, their contribution to building peace takes on a paramount role,’’ he continued.

Mr. Aquino pressed for the full implementation of the Asean Declaration on Strengthening Social Protection.