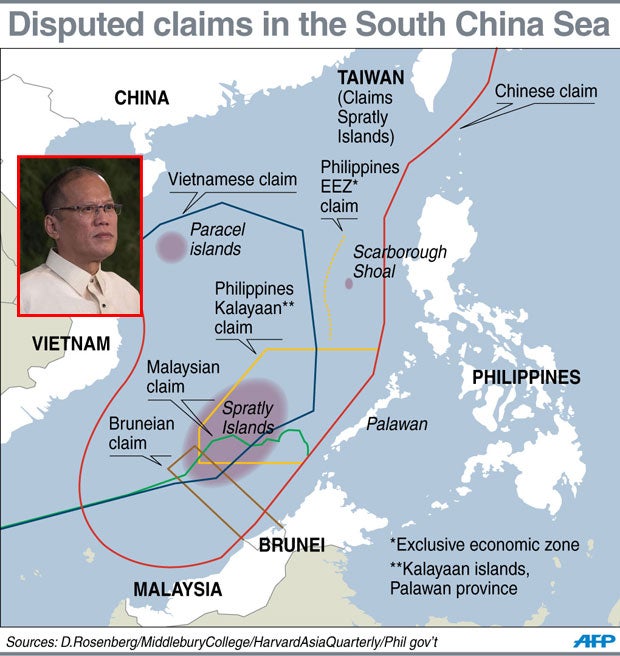 NAYPYITAW, Burma—President Benigno Aquino III on Saturday vowed to press anew for the rule of law in resolving territorial conflicts at the annual gathering of Southeast Asian leaders, which opens here Sunday amid a surge of tensions in the South China Sea.

Mr. Aquino arrived here in the afternoon for the 24th Summit of the Association of Southeast Asian Nations (Asean) that began with a dinner hosted by Burmese President Thein Sein for the Asean leaders.

Before departing for Burma, Mr. Aquino said he would apprise the other Asean leaders of the Philippine case questioning China’s claim to almost the entire South China Sea at the United Nations arbitral tribunal.

“This is what we wish to express: Let’s uphold and follow the rule of law in resolving territorial issues so that recognition and respect for the right of each country prevails,” Mr. Aquino said in a departure speech at Ninoy Aquino International Airport in Manila.

“This step mirrors our position: A dialogue between two countries can’t resolve issues affecting different members of a region,” he added.

China claims 90 percent of the 3.5-million-square-kilometer South China Sea, including waters within the exclusive economic zones of Brunei, Malaysia, the Philippines, Vietnam and Taiwan.

Vietnam is locked in a standoff with China in the East Sea where Beijing has moved a deepwater drilling rig to explore for oil near the contested Paracels Islands. Hanoi has accused Beijing of using water cannon and ramming eight of its ships to drive them away last Sunday.

On March 29, the eve of the Philippines’ filing of its case in the International Tribunal on the Law of the Sea in The Hague, the Netherlands, the Chinese again tried to drive away a Philippine resupply ship, but were outsmarted by the Filipinos with air assistance from the US Pacific Command.

And on Tuesday, Philippine maritime police seized a Chinese fishing boat and detained its 11-member crew after finding 400 protected sea turtles aboard the vessel at Hasa-Hasa Shoal (Half Moon Shoal) in the West Philippine Sea.

Asean foreign ministers, meeting here also on Saturday, expressed “serious concerns” over the fresh surge of tensions in the sea.

In a joint statement issued after a series of discussions, the ministers urged the countries involved “to exercise self-restraint” and “avoid actions that could undermine” peace and stability in the area.

They also said the parties should resolve the territorial disputes peacefully, “without resorting to threats or use of force.”

The ministers called on all claimants to fully and effectively implement the Declaration on the Code of Conduct of Parties in the South China Sea, the nonaggression pact that Asean signed with China in 2002, “to create an environment of mutual trust and confidence in.”

They emphasized the need for “expeditiously working” toward an early conclusion of a code of conduct in the South China Sea to prevent the overlapping territorial claims from erupting into conflict.

The ministers also reaffirmed the importance of maintaining peace and stability, maritime security, freedom of navigation and overflight in the South China Sea.

The summit opens Sunday morning with all the Southeast Asian leaders discussing Asean integration and connectivity at the Myanmar International Convention Center.

After lunch, they will meet again for the retreat session and tackle current regional and international issues. President Aquino will be the sixth leader to make a statement.

Assistant Foreign Secretary Charles Jose said on Friday that the Philippines and Vietnam were expected to become more vocal on the South China Sea disputes because of China’s increasing aggressiveness in asserting its claims.

Jose also said Mr. Aquino would push for the early conclusion of the code of conduct in the South China Sea.

In his departure speech in Manila, Mr. Aquino said he would engage the other Asean leaders on a host of issues, including strengthening security, responding to climate change and taking care of marginalized sectors.

“It’s clear to us: The difficulties facing Asean would be resolved sooner if there is strong cooperation between the member countries,” he said.

This, he said, is the founding principle of the Asean Agreement on Disaster Management and Emergency Response that became the means for Asian countries to provide aid for the survivors of Supertyphoon “Yolanda” (international name: Haiyan), which devastated Eastern Visayas and large swaths of central Philippines in November last year.

“That’s why we will take this opportunity to personally thank them for their help and support,” Mr. Aquino said.

The President said he would also report on the signing of a peace agreement with the Moro Islamic Liberation Front, which includes the establishment of a new, autonomous Bangsamoro region in Mindanao.

“This way, we will be able to present a model for achieving lasting peace that brings about wide development,” he said.

Malacañang has allotted P6.8 million for Mr. Aquino’s attendance in the summit.

Aquino pushes for rule of law in resolving territorial disputes