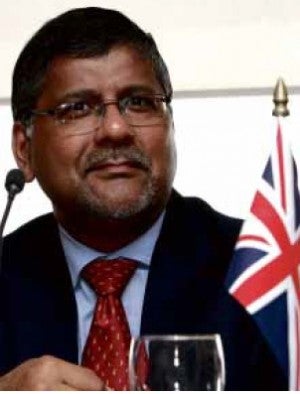 AMBASSADOR AHMAD: We are there for them, we care about them.

In this basketball-crazed nation, one intrepid diplomat is hoping to literally change the game.

British Ambassador to the Philippines Asif Ahmad, an impassioned football fan, is marching on with his advocacy of propagating the world’s most popular sport still fledgling in the country by playing coach for one day to a local team of underprivileged children from a Taguig village.

“This is a world first. I am coaching football in Filipino,” the Tagalog-savvy Ambassador said in jest on the sidelines of the training under the sweltering noontime heat on Wednesday at the tennis court in his Forbes Park residence.

“In the Philippines, sometimes this sport of football is known for being only for rich people and their rich children. What we’re saying is, football is for everyone. And by choosing this team in this competition, we’re making sure the game is played in every barangay. The excitement that it will generate will be fantastic,” Ahmad said in an interview.

Ahmad, who describes himself as a fan of the Liverpool Football Club on his official Twitter account, is keen to convert the Philippines from the court to the pitch, broaching the idea to President Benigno Aquino III during their first official meeting shortly after the envoy’s appointment to Manila last year.

“I said to him, ‘Do you know the Azkals are now one of the highest-rated teams in Asia?’ And his adviser said, ‘Yes, that’s true Mr. President.’ I said maybe you should consider football as a national sport,” said Ahmad, clad in a Liverpool FC jersey.

He was referring to the Philippine national football team credited for the revival of interest in the sport here, with its crop of both homegrown and Europe-raised players including prominent booters, brothers Phil and James Younghusband.

“He said, ‘Perhaps you’re right, because we’ll never be tall enough to play basketball.’ But in football, you can be close to the ground or be towering, there’s space for everybody and you can succeed no matter what you are,” said Ahmad, sharing how football first became popular in the United Kingdom’s working class communities.

As part of the envoy’s vision of raising the profile of the British national sport in the Philippines, the UK is supporting a team of 23 children from the Gawad Kalinga Village from Barangay Pinagsama, Taguig City, with a lot of youngsters 13 and below drafted to play for the first Ambassadors’ Cup.

The tournament, which culminated in a daylong tournament on Saturday, is a grassroots football project launched by the University of Asia and the Pacific (UA&P) and 11 foreign embassies in the country, with the goal of bringing the game to the grassroots.

The embassies of the UK, United States, Canada, Nigeria, South Africa, Timor Leste, South Korea, Indonesia, Mexico, Argentina and Chile fielded teams to Saturday’s Cup, along with one from the Philippines.

Over the last month, the foreign missions, along with the Philippine Football Federation and Team Soccerroo FC of the United Football League (UFL), trained players and coaches and brought them to a UFL football match, said Leon Peckson of the UA&P Ambassadors’ Cup Task Force, which served as the coordinator for the event.

“[The UA&P] would like to develop football as an industry … and we’re also interested in football in the grassroots, as a way of bringing up the youth, as a way of teaching values and forming character,” Peckson said.

“From what we’ve learned and what we’ve done with many communities involved in the Ambassadors’ Cup, the sport naturally in itself teaches a lot of virtues, and the kids have benefited greatly from just a month of intensive training they’ve had under the cup,” he said.

This is apparently true for 13-year-old UK Team striker John Peter Bautista, who credits the sport for helping him resist the temptation of smoking and even improving his grades in school, particularly in physical education.

“My friends pushed me into smoking. I got curious. But when I started football, our coach taught us intense discipline to fight vices,” said Bautista, who grew up in a village that was once a squatters colony in Taguig City.

“Football takes the children away from vices, unlike other kids [in the village] who grew up before that. That’s what changed. They get trained, learn self-discipline and respect for their parents,” he said.

UK support all the way

Lead coach Gerald Mendoza, who has been a volunteer for the job since 2011, could not be more grateful for the support his team has received from the sport’s originators no less.

“It’s the first time for us to get this kind of support. That it came from the country that invented the sport is a huge honor for us,” Mendoza said in Filipino.

Ahmad said the UK Embassy was committed to sustain support for the team even after the Ambassadors’ Cup.

“I think the biggest thing that anybody wants in any kind of sport is that they know they have our support, that we’re in the background, we are there for them, we care about them, and if they succeed, we celebrate with them. If they are less than successful, we’ll work with them ’til the next time they’re ready again. So this is not a one-off,” the ambassador said.

The UK earlier flew members of the Philippines’ national under-11 football team to a top athletics school in Britain for a two-week football training program. Ahmad, who makes it a point to rise before dawn in Manila to catch European football matches live on cable TV, also hopes to bring more English clubs to the Philippines to undertake football clinics.

“What we want them to learn is how to overcome adversity. Football is a game where no matter what your upbringing is, whatever, if you’ve got any talent of any sort, you can actually perform,” Ahmad said.