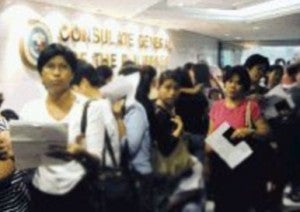 MANILA, Philippines – Hundreds of Filipinos overseas trooped to Philippine Embassies and Consulates worldwide at the start of the registration for Overseas Absentee Voting (OAV) last Tuesday May 6, 2014.

In the Philippine Embassy in Singapore, 49 Filipinos registered on the first day, the Department of Foreign Affairs (DFA) said in a statement.

“The Embassy was able to record a total of forty-nine (49) registrants for overseas voting. Some of the applicants who were in the Embassy processing other consular documents took the time to register as voters for the registration process as well,” it said.

“New registrants will join the over 50,000 overseas voters allowed to vote in Singapore for the upcoming overseas voting process in tandem with the national elections of 2016,” the statement said.

There is a total of 184,498 permanent, temporary, and irregular Filipinos in Singapore as of December 2012, according to records of the Commission on Filipinos Overseas (CFO).

In the Philippine Consulate General in Hong Kong, the first registrant was Philip Tubeza, a former reporter of the Philippine Daily Inquirer who is now working for Hong Kong News.

“[Tubeza] was already at the Philippine Consulate General 30 minutes before the opening time. This will be Tubeza’s first time to register as a voter,” the Consulate said in a statement.

In Saudi Arabia where there are more than 1.2 million Filipinos, 141 applicants registered for OAV in the Philippine Embassy in Riyadh on the first day.

“A total of 141 applications for registration were facilitated by the Embassy on the first day,” the Embassy said in their statement. An outreach mission is also set to be conducted from May 9 to 10 in the Eastern Province of the Middle Eastern country.

Consulate sends out notice for registration of overseas absentee voters