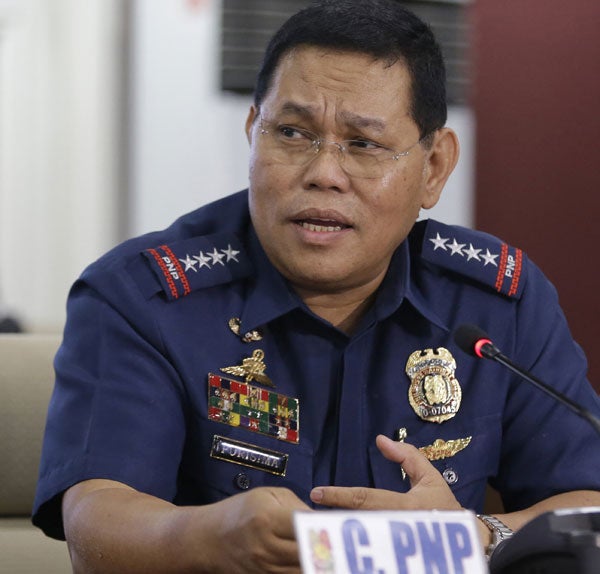 Philippine National Police chief Allan Purisima addresses the media during a news conference on the police’ arrest of Chinese fishermen at one of the disputed Shoals, the Half Moon Shoal, off the South China Sea Thursday, May 8, 2014 at the police headquarters at Camp Crame northeast of Manila, Philippines. Purisima said the government will investigate 11 arrested Chinese fishermen if they illegally entered the country or committed other crimes, ignoring China’s demand for them to be immediately freed. China pressed the Philippine government Thursday to immediately release the fishermen and their boat, warning Manila not to take any more “provocative actions so as to avoid further damage to the bilateral relations.” Philippine maritime police took the fishermen into custody Tuesday in a disputed South China Sea shoal. AP

MANILA, Philippines—It’s ours, not yours.

The Philippine National Police (PNP) refused to stand down on Thursday after Beijing demanded the release of a Chinese fishing vessel and its crew who were held by maritime policemen in the disputed waters off the West Philippine Sea in Palawan on Tuesday.

PNP Director General Alan Purisima insisted that the waters near Hasa-Hasa Shoal (Half Moon Shoal) in Balabac town, Palawan, where the foreign vessel and its crew were accosted by the PNP Maritime Group (MG), was well within the Philippine territory, rejecting China’s call to release the 11 suspected Chinese poachers.

“Our assertion is that it’s ours. That is within the Philippine territory. That’s why we have a dispute (with China),” Purisima told a news conference at Camp Crame.

As to Beijing’s claim that the arrest of the crew and the seizure of the fishing boat was a provocative action, he said: “That is their statement, but we are just doing our job.”

Apparently avoiding a diplomatic tiff with China, Purisima said they have already referred the incident to the Committee on Illegal Entrants.

When asked about China’s demand for the Philippine authorities to release the Chinese fishermen, he said: “We will (observe) the process and refer it to the Committee on Illegal Entrants.”

The committee is composed of representatives from the Department of Justice (DOJ), Department of Foreign Affairs (DFA), Bureau of Immigration (BI) and other government agencies.

“Let the investigation take its course,” Purisima said, adding that the police would leave it up to the committee what cases should be filed against the foreign fishermen.

Despite the PNP’s earlier statement that the fishermen were Chinese nationals, Chief Supt. Noel Lazarus Vargas, PNP-MG director, clarified that the police have not, in fact, determined the nationality of the 11 foreign fishermen.

He, however, admitted that the “foreign fishing vessel,” marked 09063, had a Chinese flag on its stern.

“But we cannot assume that all its passengers were Chinese just because it had a Chinese flag,” Vargas said.

He noted that maritime policemen recently seized a fishing boat, also in the West Philippine Sea, which carried a Chinese flag, but whose six-member crew were from Malaysia, Indonesia and Vietnam.

Vargas also denied reports in the Chinese media that the policemen fired gunshots before they boarded and commandeered the vessel.

“That is their statement. I do not know where they got their information. As far as the PNP is concerned, we did not fire shots,” Vargas said.

As part of its protocol, he said the PNP had already informed the DFA and the BI about the incident.

He said the arrested foreign fishermen would be brought to Puerto Princesa City where appropriate charges would be filed against them.

In an earlier interview, Vargas said a case for violation of the Philippine Wildlife Act would be brought against the crew of the Chinese vessel.

“We will make sure that they are being treated humanely. We will also inform other concerned government agencies,” he said.

Arrest of Chinese fishers not motivated by sea tension—Roxas