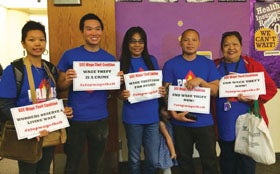 • Epidemic in Santa Clara County, with 300 claims from workers each month

SANTA CLARA, California — In a report it released recently, the Santa Clara County Wage Theft Coalition urged the county to do more in the face of alarming numbers of wage theft and retaliation complaints filed at the State Labor Commission’s San Jose office.

“While wage theft is a national epidemic, the San Jose office of the Labor Commission handles approximately 300 claims from workers in the county each month,” said report collaborator Shannon Gleeson. PhD. “(It is) the highest number of all the 16 regions with an average of thousands of dollars more per worker statewide.”

Between 2012 and 2013, the State Labor Commission in San Jose awarded $8.4 million in wages. “But workers could only collect $2.2 million or 33 percent of the award,” explained Ruth Silver Taube, supervising attorney of Workers Rights Program–Katharine and George Alexander Community Law Center.

“A lot of the workers can’t collect the wages owed them because their employers say their business is going bankrupt or that their ownership is changing,” observe Michael Tayag, an organizer for Pilipino Association of Workers and Immigrants (or PAWIS, a member of the wage theft coalition).

The U.S. Department of Labor Wage and Hour Division’s Demetria Manuselis said it has identified certain industries where there are significant violations.

In Santa Clara County, specifically, it is the care home industry, a staple job among minorities, especially Filipinos, where wage theft and poor working conditions are rampant.

Tayag told FilAm Star, “Fourteen percent of those who approached Katharine and George Alexander Law Center for workers’ rights violations were Asian/Pacific Islanders, a large percentage of those were Filipinos.”

To have a sense of the number of Filipino workers affected by wage theft and retaliation, Tayag shared this excerpt from his research:

“Out of a general population of 7,039,362 in the San Francisco, San Jose and Oakland, California region, where Santa Clara is one of nine counties, Filipinos make up 379,196. In the same region, two percent of Filipino men are employed in the healthcare support industry, into which caregivers would fall, and 6.4 percent of Filipino women are employed in this industry (Ating Kalagayan), Chua, 2009).

The same study explained, “Considering that 24 percent of the Filipino population in the U.S. is undocumented, there would be a substantially higher estimate if counting Filipinos without legal residence.” And this was more than 10 years ago.

Violations on all fronts

“The standard that we have seen is that employees are being paid a daily rate, but they are often working 24-hour shifts. Sometimes sleeping on the floor, the couch (so they can easily attend to the patient in the middle of the night) or in a garage. We’re finding sometimes (their pay) doesn’t cover the federal minimum wage of $8 per hour (in California, $10.15 in San Jose),” Manuselis rued.

Joan Soliven, vice president of PAWIS, gave her testimony as a caregiver for the disabled and the elderly. On the job for a year and two months, she said, “My employers took out $60 (off my salary) every month for my medical benefits. But I still paid for my own hospital bills.”

Soliven also said, “Several PAWIS members filed claims with the State Labor Commission in the County for hundreds of thousands of dollars in back wages” and “wage theft is very common, but a lot of low-wage workers fear retaliation (from their employers). It’s hard to find jobs especially when you’re supporting families in the Philippines.”

Another worker, named Rico, testified, “I’ve worked for a local security company, owned by a San Jose police officer of all people, for four months and have not received wages for four months.  I’ve reached out to Madison Nguyen (San Jose vice mayor, who’s running for mayor this year) to help me with the situation because she is a close friend of the owner. And I’ve been met with silence.”

Gleeson said that violations have been coming in various forms and schemes.  “We have found workers who were frequently paid with bad checks, paid off the book without tax deductions, misclassified as independent contractors thereby shifting the responsibility of payment to (ghost) sub-contractors,” she illustrated.

“Some do a cost-benefit analysis that weighs heavily in favor of violation,” he said.  “At the same time, workers are afraid and with good reason. That there will be consequences if they speak up, that they will be retaliated against.”

According to Taube, what might get the attention of wage theft-violating employers is the enactment of an ordinance in Santa Clara County that provides for the suspension of permits.

The Department of Environmental Health, he said, has the power to suspend the permits of any restaurant or grocery store in the county with unpaid wage theft judgment.

“We also recommend that the ordinance include a provision that a wage lien like a mechanic’s lien should be available to all victims of wage theft,” she added.  “And this lien would attach to the property of the wage theft violator. The County Recorder can record the lien.”

She continued:  “We recommend further, as Supervisor Dave Cortese stated, that those who contract with the county must divulge when they have a wage theft judgment. And that we should reward employers who obey the law and institute programs to recognize responsible employers. We should give the DA’s office the go-ahead and prosecute employers who engage in egregious wage theft violations.”

She said, “Over the last three years, we’ve collected more in wages and penalties than at any time in the agency’s history. We now have a fast track system – we try to resolve a claim very quickly. We notify the employer within five days and we expect a response from them in five days to justify their action.”

Healy said they also created a criminal investigation unit, are working closely with the DA’s Office and seeking a more criminal prosecution of the grossest violations. In the next couple of months the Labor Commission is sponsoring a website dedicated to wage theft in English and Spanish.

But Santa Clara County is under-resourced and needs to take a page from other states that have encountered wage theft and retaliation.

Workplace Justice Initiative’s Charlotte Noss, who also collaborated on the Coalition Report, said, “There are models to look at in other localities.”

“For example, San Francisco passed the minimum wage 10 years ago and they acted at that time to enhance local law enforcement,” she explained.

“The San Francisco Office of Labor Standards Enforcement has been enforcing San Francisco-specific laws for 10 years. They have 16 investigators who focus on minimum wage, health insurance and sick leave. In the past several years, San Francisco has also been funding community groups to educate, assist and support workers when they come forward to file complaints,” Noss added.

Citing another example, Noss said the sheriff in Hayward would accompany a day laborer when they experience wage theft, and would then ask the employer to pay the wages owed.

Houston, Texas, on the other hand, she said, operates a wage theft database and won’t allow any business that appears in the database to renew or continue their operations. There’s also a wage theft hotline in Texas and authorities have focused law enforcement that investigates wage theft across the state.

Seattle has forbidden any retaliation based on immigration status and they are considering a local enforcement agency focused on these issues. Massachusetts has a presumption that if retaliation occurs, there’s an adverse employment action that occurs at a specific time.