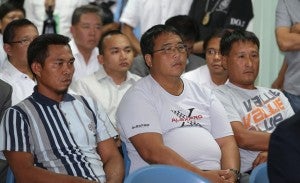 Fishermen Indonesian Imam Buchaeri, left, Taiwanese Hong Jie Shang, center, and Hong Yu Zhi, right, listen during the start of a hearing at the Philippine Department of Justice in Manila. They testified at the hearing against eight members of the Philippine Coast Guard involved in the fatal shooting of a Taiwanese fisherman. AP FILE PHOTO

MANILA, Philippines—The members of the Philippine Coast Guard (PCG) slapped with homicide case for the death of a Taiwanese fisherman in May last year posted bail for their temporary liberty.

Lawyer Rodrigo Moreno, counsel for the accused, in a phone interview, said the Coast Guard men posted P40,000 bail before the Manila Regional Trial Court for the homicide case and P12,000 bail for obstruction of justice before the Metropolitan Trial Court.

Moreno said even if the cases are before the Batanes and Cagayan Court, the accused are allowed to post bail in Manila.

Under the Rules on Criminal Procedure, Moreno said the accused are allowed to post bail in the area where they are arrested.

The accused fired at Taiwanese shipping vessel Guang Da Xing No. 28 and killed Hung Shih Cheng; they were patrolling the channel on board Bureau of Fisheries and Aquatic Resources (BFAR) vessel MC5-3001.

The incident sparked tensions between Taiwan and the Philippines.