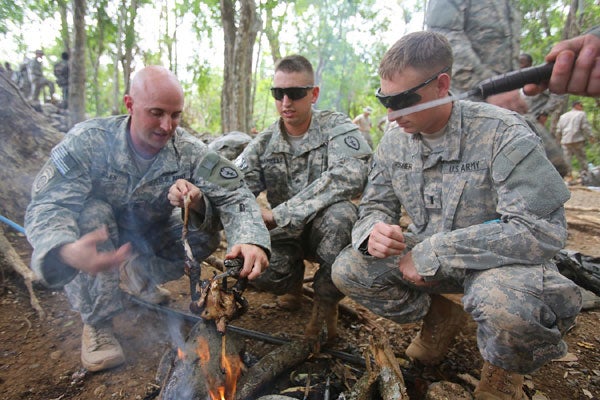 Soldiers learn to cook a chicken in a field environment during a jungle warfare training exercise as part of a buildup to Exercise Balikatan 2014. PHOTO BY LANCE CPL. SHALTIEL DOMINGUEZ/US MARINE CORPS

MANILA, Philippines—US troops participating in the Balikatan exercises at Fort Magsaysay in Nueva Ecija were taught by Philippine soldiers how to cook a cobra as part of the jungle survival training.

The soldiers from the Philippine Army Special Forces taught the US forces the basics in jungle survival such as trapping, foraging, nutrition and preparing animals and plants for consumption, wrote Lance Corporal Shaltiel Dominguez in an article published at Defense Video and Image Distribution System.

The US soldiers are proficient in urban operations, and the jungle training will help them “should the need arise.” The resources used for the survival include coconuts, herbs, goats, fish, chickens and snakes. 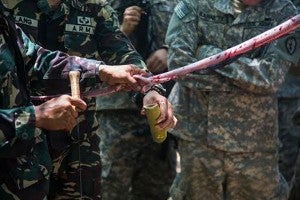 “It’s important that soldiers are able to survive off the land to sustain themselves, especially in environments where there’s not much opportunities for resupply,” said 1st Lt. Nicholas Risher, officer-in-charge of the 25th Infantry Division. “If we can feed ourselves out there, then we can last longer and fight harder.”

It was Army’s Technical Sergeant Riden Dumalig, an instructor from the Special Forces, who taught the American soldiers how to cook a cobra in a jungle environment.

“I like training and interacting with the American soldiers,” said Dumalig. “It’s a good learning experience for both parties, and I feel that we are teaching them valuable knowledge that will help them when they conduct operations in the jungle.”

“For me, the hands-on instruction we’re getting from the Philippine Special Forces is the best part of the training,” said Risher. “This is valuable training that we can’t get anywhere else. This is especially valuable at a time when we’re moving out of Iraq and Afghanistan into other environments, and it allows us to be more prepared for conflicts in the Pacific or anywhere there’s a jungle environment.”

The RP-US Balikatan Exercises this year is centered on maritime security. About 5,500 American and Filipino soldiers will take part in humanitarian activities and field exercises that will be held in mostly in Luzon from May 5-16.

Read Next
Is PH a miserable nation?
EDITORS' PICK
‘Justice will be done,’ Duterte assures as he vowed probe on Jolo incident to bare ‘truth’
EuroMillions Superdraw: A lottery draw unlike any other is coming to the Philippines
Current dominant strain of COVID-19 more infectious than original—study
DOLE: Return of OFWs’ remains from Saudi to be ‘delayed,’ deadline moved to ‘early next week’
Smart releases Hyun Bin’s second TVC
Water remains our saving grace right now
MOST READ
BREAKING: Duterte signs anti-terror bill into law
Duterte tells military: No other president looked at you the way I did
Locsin warns of ‘severest response’ if China’s army drills in SCS ‘spill over’ to PH domain
Vico: Cleanup of bidding process saved Pasig gov’t P415M
Don't miss out on the latest news and information.