Remittances, IP addresses led to arrest of 58 ‘sextortionists’ in PH

MANILA, Philippines – Transactions via local remittance centers and Internet Protocol (IP) addresses furnished by the Interpol to the Philippine National Police (PNP) led to the arrest of 58 people allegedly involved in online sex and extortion in the Philippines, officials said.

A recent multi-agency crackdown, led mainly by the Interpol and PNP Anti-Cybercrime Group under Operation “Strikeback”, made the arrests in raids in Taguig City and the provinces of Laguna, Bulacan and Bicol.

Senior Superintendent Gilbert Sosa, PNP Anti-Cybercrime Group (ACG), said in a Friday press briefing at the PNP headquarters in Camp Crame that the police were able to trace the transactions of the suspects with their victims through remittance centers.

The suspects have come to be called “sextortionists”, a combination of sex and extortion where the suspects blackmailed their victims who were recorded performing sexual acts online, which include posing nude in front of a webcam. 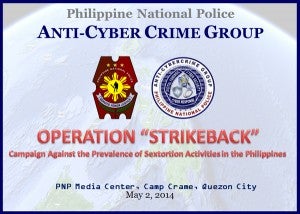 The blackmailers then used the video or image to extort more sexual favors or money from their victims in exchange for keeping the recording in their possession and not spreading it online.

In Bicol, the “sextortion” dens were disguised as call centers.

“Operating in this kind of online scheme or “sex extortion” by agents as they call it themselves, is making money ranging from P22,000 to P90,000 per successful client,” Sosa said in a separate statement.

The sextortion agents, according to Sosa, also get bonus incentives during holiday, cash, or mobile phones to reach their “financial targets.”

Unlike those operating in other areas, Sosa said sextortion centers in Bicol have devised their own payment system that the authorities could not track easily.

Aside from the remittance centers, Senior Inspector Jhoanna Gracia Fabro, PNP ACG Information Officer, told INQUIRER.net that the Interpol furnished them a “one-page list” of IP addresses from Internet users in the country.

In most cases that reached the Interpol, Fabro said the owner of the IP addresses were traced to “sextortionists” operating in the Philippines.

“That was how meticulous the process was. We were able to build an operation from a one-page paper to this kind of information during our surveillance,” Fabro said.

Chief Inspector Louis Kwan, of the Technology Crime Division of the Hong Kong Police Force, told INQUIRER.net that majority, if not all, of the sextortionist suspects in their country were from Philippines.

“Based on our data, almost all of our cases can be traced back to Philippines. Other isolated cases were from other countries but the majority came from the Philippines,” Kwan said.

Only in the second quarter of 2013, Kwan said, that sextortion became a rampant illegal activity in their country that it has become “a trend” in HK.

“And it’s alarming because in almost all of the cases, we know that the perpetrators are not local in HK,” he added.

Not the ‘sextortionist capital’

In his speech before international police officials gathered in Camp Crame Friday, Director General Alan Purisima, PNP chief, said the Philippines has been labelled the “sextortion capital of the world” although Sosa and Sanjay Virmani, Interpol Digital Crime Center director, denied this claim later in an interview with INQUIRER.net.

“Absolutely not,” Virmani said when asked if the Philippines was the “sextortion capital of the world”.

“This actual type of criminal activity is obviously global and it can emanate from any particular region,” he explained.

In the press briefing, Virmani also pointed out that the scale of these sextortion networks was massive.

But when asked why they prioritized Philippines, Virmani said it was because of the PNP’s initiative to coordinate with the Interpol and not because the country was the sextortion capital of the world.

He added that the Interpol would use the PNP ACG’s operation strikeback as “a model” for their future cybercrime operations.

Even Sosa contradicted his superior’s statement.

“We cannot say that. There were similar reports in other countries, not only in the Philippines,” Sosa said in Filipino.

Could have been avoided

Recalling the delayed approval of the Cybercrime Prevention Act of 2012, Sosa told INQUIRER.net that if the act were signed earlier, the police could have prevented the spread of the sextortion in the country.

“There were no effective cyber laws from year 2010 to 2012, we could have avoided the spread of sextortion here if it had been signed in to law earlier,” he said in Filipino.

Sosa said the Section 4, C1 of the Republic Act No. 10175 or citing cybersex as a grave offense, could have expedited the arrest of the cyber criminals.

“We could have addressed more cybercrimes in the country because there were a lot of violations that were not covered before,” he added in Filipino.

Other countries involved in the operation against “sextortion” are Hong Kong, Singapore, Scotland, United Kingdom, and Australia.

In February, the Supreme Court upheld the constitutionality of some provisions in the controversial law.