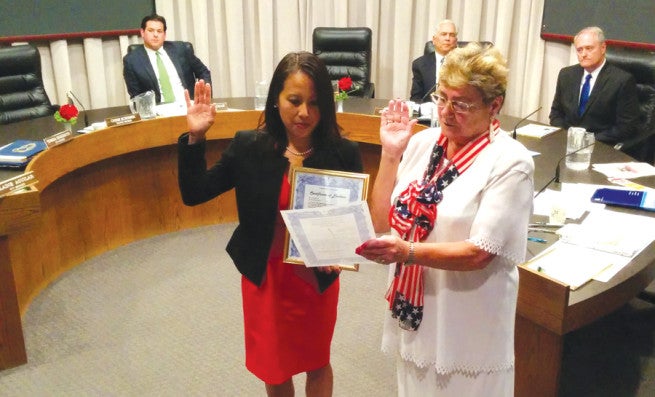 City Clerk Nancy Shollenberger administered the oath of office for Arizmendi, as well as for other incoming council members Denise Delmar and Gene Goss.

“I am humbled and really honored to be sitting up here today with (my fellow council members), Arizmendi said. “I am really looking forward to serving Sierra Madre. It is really my intent to represent all of you that are here, and all of the residents at home watching [the live broadcast of city council meeting].”

Arizmendi, 42, later told Asian Journal that she was “excited and thrilled” to start her term. After a lot of hard work that went into her campaign, Arizmendi said that it was “great to take that oath.”

Arizmendi admitted that she didn’t have her agenda set up yet, but she emphasized her commitment to following through on her campaign promises: enforcing financial stability with the city budget, making sure that the city government works to enhance and maintain the quality of life in Sierra Madre, and making sure that Sierra Madre downtown stays friendly and safe.

Sierra Madre is currently facing difficulties with its water supply due to the drought, as it gets its water from an independent municipality. Residents have encountered problems of discoloration and limited supply.

Arizmendi said that the city council would look to fix infrastructure and maintenance issues to cope up with this problem.

She said that there were some existing grants that could help fund the city’s efforts to address the problem, and the city council could look into those opportunities.

“Without [the measures to address infrastructure and maintenance], we’re being inefficient with our water flow. So it really has to be one of our priorities. And it does fit into the fiscal accountability part, too… making sure that we’re use our tax dollars the right way,” Arizmendi said.

Pastor, 72, said that she was happy and proud of her daughter, and that she believed Rachelle would do well as a public servant.

“I know that she can make it. She has been doing this ever since. I’m really very proud of her,” Pastor said.

Apparently, serving the community runs in the family. Pastor said that she has been active in participating in the organizations within the Filipino community, and that Arizmendi saw her mother’s work when she was still young.

“Everywhere I went before, she was with me. She has experienced it also. I think it’s already in our blood,” Pastor said.