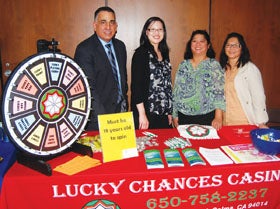 Some 50 booths occupied both floors of Daly City Hall with chamber members ranging in membership from small businesses to major corporations.

The second floor held the culinary portion to the event with choices from local services in the catering and restaurant business that were eager to showcase their food.

Appearing at the four-hour long showcase on behalf of Lucky Chances, the Filipino-owned gaming establishment was COO/VP of Casino Operations Art Van Loon. Lucky Chances will be celebrating its 16th year in operation this June.

Van Loon was joined by Lucky Chances staffers Crystal Lee, Carmela Mamaril and Carlota Mamaril, who tended the booth and doled out the logo-adorned giveaway prizes to event-goers.

Georgette Sarles, DC Chamber of Commerce president/CEO, said she was pleased with the turnout and stressed how important the networking event is to “developing positive relationships within the community.”

“These businesses all form one big team,” Sarles said. “It makes it so much easier when everybody works together.”

A longtime business advocate and small business owner herself, Sarles thanked the event’s loyal participants, many of whom have been part of the chamber for close to two decades.

The networking event hopes to successfully increase business contacts and enhance business activity in Colma and Daly City through referrals.