MANILA, Philippines—What’s going on with US President Barack Obama?

Ask him about his first-ever visit to Manila and he might just talk about one unforgettable night in the Palace where the Philippine President lives, when he took part in a jam session with three Philippine Cabinet secretaries audacious enough to perform live for their VIP guest.

That happened at last Monday’s state dinner where there was clearly no shortage of professional performers—the likes of apl.de.ap, Leo Valdez, Bituin Escalante, Kuh Ledesma, the Philippine Madrigal singers and the Power Dance Company. 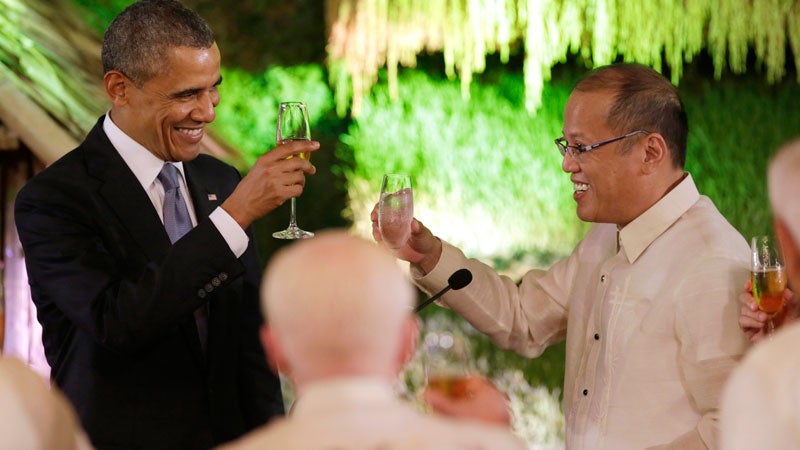 It’s one of Obama’s favorite songs (reportedly second on his iPod list), a deeply textured tune inspired initially by police brutality against black kids in the United States.

Anyone among the celebrity singers in attendance could have done justice to Marvin Gaye. But Almendras said it was probably better to let the “nonpros” do it, if only to encourage Obama and his delegation to sing along.

And sing along they did throughout the brief performance. Almendras said Susan Rice, Obama’s national security adviser, was so into it that her boss eventually gave her the microphone.

Unlike him and Singson, Almendras said Abad didn’t have to be coerced to perform, as could be gleaned from the short video clip posted online by Finance Secretary Cesar Purisima.

Toward the end of the 1:56 clip, a voice was heard working the crowd asking, “Do you want to hear the president sing?” apparently referring to Obama. Mission accomplished because Obama was “actually singing along” during the performance.

Almendras said the idea of a Cabinet performance came Saturday night during a meeting with President Aquino.

Obama, Almendras said, “is known to be very informal … he’s very casual” so the discussion was [on] how do you make something different?”

He noted that the Filipino hosts were able to make Malaysian Prime Minister Najib Razak “sing” during a similar dinner hosted in his honor.

Singing defines most parties hosted by Filipinos here and abroad. Most parties here end up as singing fests.

In the end, Almendras said a member of the US delegation told him: “Of all the places that we’ve gone to, we really had fun here.”

In his speech during the state dinner, Obama described the Philippine welcome as “magnificent.”

“I’ve only been here one day but the kindness that you’ve shown me and the extraordinary hospitality that has been extended to us leaves us with very warm feelings and reflects, I think, the legendary spirit of the Filipino people,” he added.

Who’s who at Aquino’s state dinner for Obama