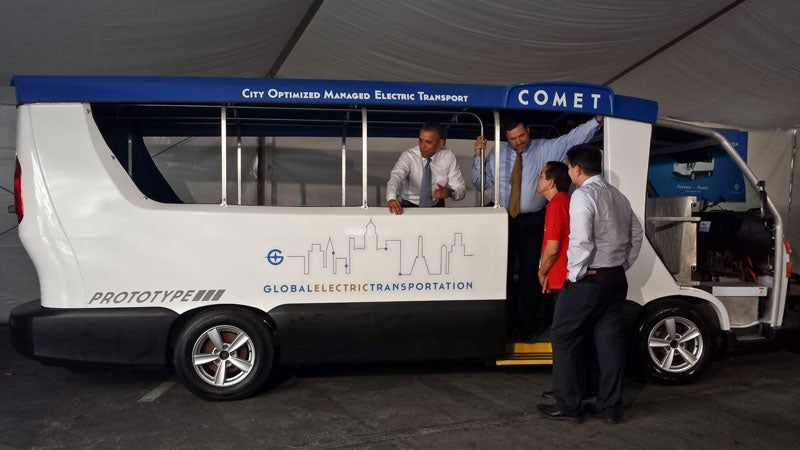 OBAMA ON AN E-JEEP. US President Obama talks with developers of an electric vehicle called Comet. Zero-emission Comets are envisioned to replace gas-guzzling public utility jeepneys on Philippine roads. With Obama are Comet developer Ken Montler (inside the vehicle with Obama), CEO of electric jeep developer Global Electric Transportation (GET); Sigfrido Tiñga, GET president; and Robert Martin of the jeepney federation Pasang Masda. TARRA QUISMUNDO

With his shiny, bomb-proof presidential limousine—dubbed “The Beast” by the US Secret Service—a few steps away, President Barack Obama briefly boarded a zero-emission electric jeep envisioned to replace the gas-guzzling jeepneys on Metro Manila’s roads.

A staunch supporter of efforts to alleviate the impact of climate change, Obama appeared impressed as he stepped inside the electric jeep on Tuesday, his suit taken off because of Manila’s humid summer weather.

Entering through the side door, the 6-foot-one-inch world leader barely had enough headroom to stand inside the electric jeep, nicknamed Comet (City Optimized Managed Electric Transport).

Obama tried the Comet in a tent outside Sofitel Philippine Plaza hotel—where he had stayed overnight—before going to Fort Bonifacio for a speaking engagement.

Comet developers said Obama was most interested about the e-jeep’s mitigating effects on pollution and its impact on the livelihood of jeepney drivers.

“The biggest deal for him is air pollution. He said, ‘If you guys can get this thing to work, it will be of big benefit,’” said former Taguig Rep. Sigfrido Tiñga, now global president of Global Electric Transport (GET) Ltd., the electric vehicle’s developer.

“He’s a big climate change guy … The way we were explaining it to him was that while many people are building electric vehicles for individual consumers, we build vehicles that are for mass transportation,” said the former politician.

Tiñga said he had seen enough of the Metro’s transport woes during his time in Congress.

A 50-50 private venture between Philippine and American developers, Comet plans to roll out some 30 units in the North Avenue-Monumento route in May, kickstarting a three-year jeepney replacement program touted as the largest deployment of e-vehicles anywhere in the world.

“And we think that’s a good enough number,” said Tiñga. “We’ll see what the kinks are, if any, and then we are chasing over a thousand units by the end of the year.”

Some 15,000 Comets are envisioned to take the place of 30,000 jeepneys in Metro Manila over the next three years, developers said. Charging stations will be installed on jeepney routes.

“In the world, this would be the largest deployment of electric vehicles that I’ve ever seen,” GET CEO Ken Montler told select reporters invited to cover Obama’s encounter with the e-jeep.

“This will be a showcase,” Montler said. “The whole world will be watching not only how they drive and how they perform but the fact that [there will be a removal of] the carbon diozide, the effect of that on climate change.”

He felt that Obama was upbeat on the project given his known advocacy for the environment.

“It was really positive. He said that’s why he’s here, because of what’s going on. He sees it as an answer to pollution,” Montler said, relaying snippets of the conversation with the US president that was not audible to reporters, who had been cordoned off.

He said Obama even asked how many people could fit on board the e-jeep, to which Montler replied in jest: “Sixteen Americans or 21 Filipinos.”

A reinvention of the Filipino mass vehicle that traces its roots to surplus US Army jeeps left in the Philippines after World War II, the Comet retains the open-window design of the traditional jeep but has a more sleek, modern look with its white body and blue top.

GET takes care of the software side, including the fleet management system for dispatch and pickup—there will be designated pickup points—and a cashless, prepaid card-based fare system based on the current fare standard of P8 minimum fare.

Powered by lithium ion batteries, a Comet could cover up to 80 kilometers for every full charge cycle at less than half the cost, with the drivers paying for fuel and with zero carbon-dioxide emissions, Tiñga said.

This would support efforts for cleaner air in a city where about 85 percent of pollution is caused by vehicles, which in turn causes an estimated P2.2 billion—or $50 million—in annual health-care costs, per GET figures.

Weighing only a third of a typical jeepney, each Comet unit is equipped with security cameras, GPS tracking and Wi-Fi access.

Comet developers are partnered with the jeepney federation Pasang Masda. Selected drivers are to replace their old jeeps with the new electric units at a down payment of between P250,000 and P350,000. The rest of the amount will be paid in monthly installments.

Developers did not disclose the full cost of each e-jeep but every unit is estimated to have a value exceeding “more than a million (pesos),” Tiñga said.

“The key is we’re making sure that we’re not taking jobs off the road,” Montler said, emphasizing that the Comet system would follow the traditional system, where drivers own the units they drive.

Tiñga said driver-owners would have the option to spruce up their units but that many had expressed interest in using the Comet’s exterior for advertising space.

“You can do little touches, but … the ads will be designed in a way that (keeps) the jeepney style, so it won’t be the commercial style,” he said.