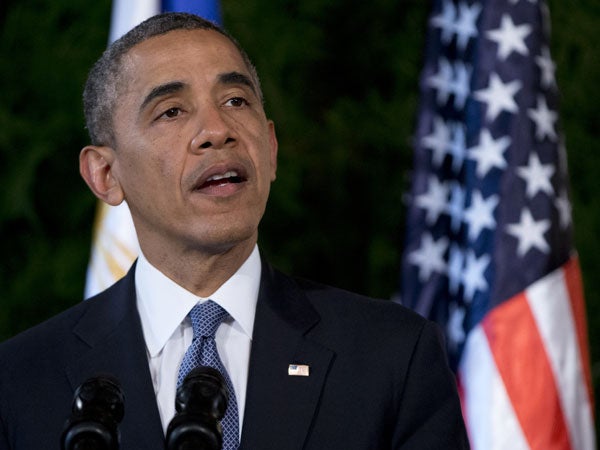 U.S. President Barack Obama speaks about the deadly tornadoes that tore through several states before making a statement during a joint news conference with Philippine President Benigno Aquino III at Malacanang Palace in Manila, the Philippines, Monday, April 28, 2014. AP

MANILA, Philippines – “It was an injustice.” United States President Barack Obama on Tuesday admitted his nation’s wrongdoing towards Filipino war veterans who were denied compensation for their services under the American flag.

“Sadly the proud service of many of these Filipino veterans was never fully recognized by the United States. Many were denied the compensation they were promised,” Obama said in his televised speech at Fort Bonifacio in Taguig City.

The visiting president said what had happened “was an injustice” that the US government worked to reverse.

“So in recent years, my administration, working with congress and others, have worked to right this wrong,” he said.

“We passed a law, reviewed the records, processed claims and nearly 20,000 Filipino veterans from World War II and their families finally received the compensation they have earned,” Obama added.

The US president recalled how Filipinos and Americans alike defended Bataan and Corregidor during World War II and later suffered as prisoners of war, many dying during the infamous death marches.

“In those years of occupation, Filipino resistance fighters kept up the struggle.  And hundreds of thousands of Filipinos fought under the American flag,” he said.

Obama honored the war veterans present in the event, saying they were an inspiration and should be saluted for their service.

He linked the past with the present by telling the US troops,  “The spirit of these veterans — their strength, their solidarity — I see it in you as well when you train and exercise together to stay ready for the future, when our special forces — some of you here today — advise and assist our Filipino partners in their fight against terrorism, and when you respond to crises together, as you did after Yolanda.”

Obama discussed in length the need to work together to strengthen the two nations’ armed forces, not only for security but also for disaster response.

“We’ll train and exercise together more to bring our militaries even closer, and to support your efforts to strengthen your armed forces.  We’ll improve our ability to respond even faster to disasters like Yolanda,” he added.

During his speech, he reassured the Philippines of the US’ commitment under the Mutual Defense Treaty.

“Our commitment to defend the Philippines is ironclad and the United States will keep that commitment, because allies never stand alone,” he said.

Filipino vets finally to get their due?