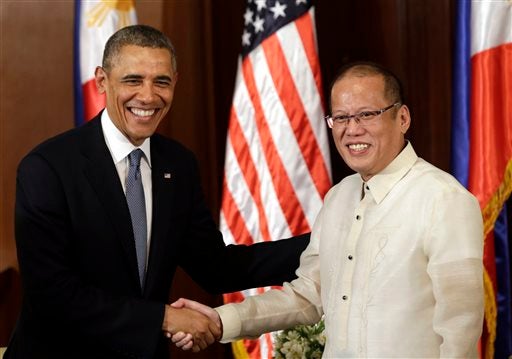 MANILA, Philippines – US President Barack Obama on Monday assured the Philippines of his government’s support in the latter’s territorial dispute with China – but it’s not the support the public was expecting.

Asked if the US will defend the Philippines in case territorial disputes in the South China Sea escalate, Obama said, “Our goal is not to counter China; our goal is not to contain China. Our goal is to make sure that international rules and norms are respected, and that includes in the area of maritime disputes.” 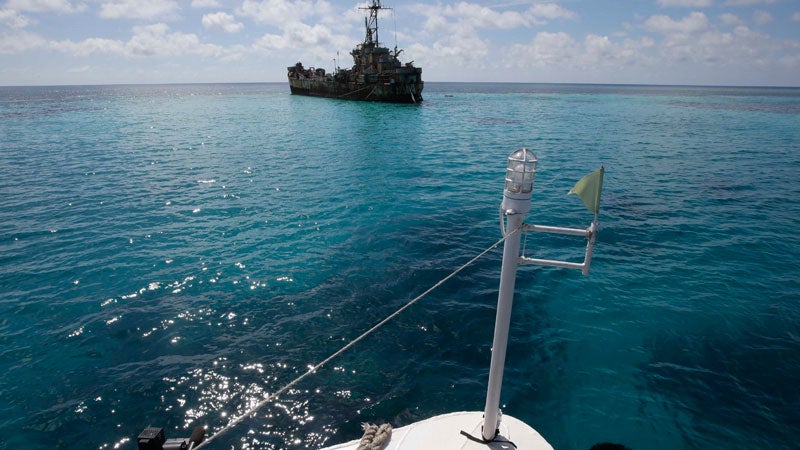 He said the US welcomes China’s “peaceful rise” amid its “constructive relationship” and “enormous trade” with the nation.

“And really our message to China consistently in a whole range of issues is we want be a partner with you in upholding international law,” he added.

“When we met in the Oval Office two years ago, Benigno and I agreed to promote a common set of rules founded in respect for international law that will help the Asia Pacific remain open and inclusive as the region grows and develop,” Obama explained.

Nevertheless, the US President said the two countries will work together to “build the Philippines’ defense capabilities.”

“I am pleased that we are beginning an important new chapter in the relationship between our countries. And it starts with our security, with the new defense cooperation agreement that was signed today,” he said, referring to the Enhanced Defense Cooperation Agreement (EDCA), which will allow US forces’ access to Philippine military facilities.

“We don’t even take a specific position on the disputes between nations but as a matter of international law and international norms we don’t think that coercion and intimidation is the way to manage these disputes,” Obama said. He added that when the US has disputes with its neighbors, it works them out through dialogue. “We don’t go around sending ships and threatening folks.”

With its anemic military, the Philippines has struggled to bolster its territorial defense amid China’s increasingly assertive behavior in the oil- and gas-rich South China Sea, which Obama flew over on his way here, according to the Air Force One cockpit. Chinese paramilitary ships took effective control of the disputed Scarborough Shoal, a rich fishing ground off the northwestern Philippines, in 2012. Last year, Chinese coast guard ships surrounded another contested offshore South China Sea territory, the Second Thomas Shoal. 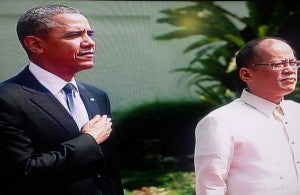 President Benigno Aquino III and US President Barack Obama stands beside each other during playing of national anthem and 21-gun salute. PHOTO BY KRISTINE SABILLO/INQUIRER.net.

Aquino, standing next to Obama in front of a lush backdrop of tropical plants, said the new agreement with the US “takes our security cooperation to a higher level of engagement … and promotes regional peace and stability.”

Still, the US increased military role has raised objections from some Filipinos and led to recent clashes outside the US Embassy between police and more than 100 left-wing activists who protested Obama’s visit and the new security arrangement. Activists say the agreement reverses democratic gains achieved when huge US military bases were shut down in the early 1990s, ending nearly a century of American military presence in the Philippines, a sensitive issue in this former US colony.

But the visiting president was cautious with the controversial subject, pointing out that the US will not have permanent bases in the Philippines.

“I want to be very clear. The United States is not trying to reclaim old bases or build new bases. By the invitation of the Philippines, American service members will rotate through Filipino facilities will train and exercise more together so that we’re prepared for a range of challenges including humanitarian crises and natural disasters like Yolanda,” Obama said.

He added that the agreement should help build Philippine capacity “not simply to deal with issues of maritime security.”

“If there are additional threats that may arise, that we are able to work in a cooperative fashion,” Obama said.

The US President heralded the Philippines continuous economic growth, promising support from their business sector.

“I congratulated President Aquino on the reforms that he’s pursued to make the Philippines more competitive, through our partnership for growth and our Millennium Challenge Corporation compact. We are going keep working together to support these efforts so that more Filipinos can share in this nation’s economic progress because growth has to be broad-based and it has to be inclusive,” he said.

Obama also added that US Commerce Secretary Penny Pritzker will be bringing a delegation of American businessmen to the Philippines in June “to explore new opportunities.”

Meanwhile, he advised Aquino to engage in the controversial Trans-Pacific Partnership (TPP).

“We discussed the steps that the Philippines could take to position itself for the Trans-Pacific Partnership and I encouraged the President to seize the opportunity that he’s created by opening the next phase of economic reform and growth,” Obama said.

The TPP has been met with opposition in the Philippines, especially after it was suggested that inclusion would mean amending the Philippine Constitution.

The TPP is a free trade agreement being negotiated by 12 countries, led by the US. It is meant to open up economies in Asia and the Pacific. The other 11 countries are Japan, Brunei, Malaysia, Vietnam, Singapore, Australia, New Zealand, Canada, Mexico, Chile and Peru.

Aquino had earlier said he was not keen on charter change but during the joint press conference he said the Philippines “is working to ascertain how participation in TPP can be realized.”

He described the TPP as a “high standard trade arrangement that will shape the global and regional economic architecture in the 21st century.”

Hours before Obama arrived in Manila, Defense Secretary Voltaire Gazmin and US Ambassador Philip Goldberg signed the Enhanced Defense Cooperation Agreement (EDCA) at Camp Aguinaldo, paving the way for US access to Philippine military facilities in the next 10 years.

Obama’s state visit to the Philippines is the last leg of his Asian tour, following his stopover in Japan, South Korea and Malaysia over the past several days. It is part of the US campaign to re-balance its forces in the region amid China’s increasing political and military strength. With a report from Associated Press