In the Know: PH-US ties 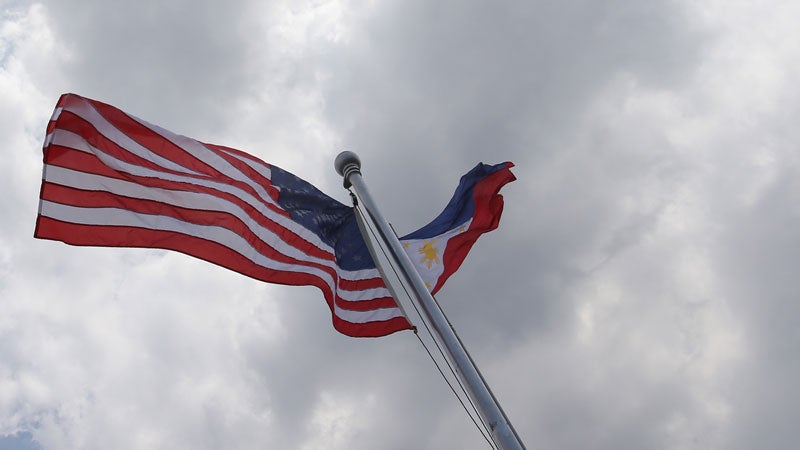 The relationship spans more than a century, bound by a history of wars lost and won, and a present filled with hopes amid threats to peace.

Philippine ties with the United States are arguably the country’s most prominent—one that Foreign Secretary Albert del Rosario recently described as “our deepest bilateral engagement.”

Trade and security are expected to top the agenda in bilateral talks between US President Barack Obama and President Aquino during the American leader’s two-day visit at the end of a four-nation tour of the Asia Pacific roiled by an increasingly aggressive Beijing laying claim to the South China and East China Seas.

Here are some key aspects of Philippine-US relations:

The United States remains among the Philippines’ top trading partners, with total bilateral trade estimated at $14.5 billion in 2013, according to Malacañang. It is also the second-largest export destination of Philippine goods, next only to Japan, with total Philippine exports at $7.8 billion last year.

The US market recently added bananas to the growing list of products and services from the Philippines. The Office of the US Trade Representative listed machinery, apparel, fats and oils (mainly coconut oil), raw beets and sugar canes, processed fruit, tree nuts and fruit and vegetable juices as its largest imports from the Philippines in 2012.

The Philippines has expressed interest in participating in the second round of talks under the Trans-Pacific Partnership (TPP), a US-led free trade agreement currently being negotiated among 12 Pacific Rim nations.

Philippine and US trade officials recently held talks on the TPP and overall trade last month in Washington under the Trade and Investment Framework Agreement, a “coordinating mechanism” under which the two nations have been holding regular trade and investment policy discussions since 1989.

The United States is the country’s top defense partner and stands as its only defense treaty ally, according to Malacañang. Formalized through the Mutual Defense Treaty (MDT) in 1951, security ties between the two countries cover a broad range of areas, including joint troop training for both combat operations and humanitarian and disaster response.

From a focus on counterterrorism in the wake of 9/11, the Philippine-US defense partnership is now concentrated on addressing regional security concerns, a component of the US pivot to the Asia and part of the Philippines’ goal of building a “minimum credible defense posture” amid China’s military buildup in the disputed South China Sea (West Philippine Sea).

The Philippine Embassy says US Foreign Military Financing (FMF) for the Philippines, which enables the acquisition of defense equipment, has “practically doubled” from $14 million in 2011 to $25 million last year.

The Obama administration has also proposed up to $50 million in FMF allocations for the Philippines in 2014.

While visiting Manila in December last year, US Secretary of State John Kerry also announced a fresh $40-million allocation to improve law enforcement in the Philippines, particularly in the areas of maritime security and domain awareness, and counterterrorism efforts in Mindanao.

The two countries are poised to deepen this defense and security relationship with the Agreement on Enhanced Defense Cooperation, negotiations on which recently wrapped up in Manila following eight rounds of talks.

Drafted within the bounds of the MDT and the PH-US Visiting Forces Agreement, the pact would allow US troops to access and use Philippine military bases “at the invitation of the Philippines and with full respect for the Philippine Constitution and Philippine Laws.”

The United States is among the Philippines’ top sources of assistance, with more than $1 billion in total development aid between 2011 and 2013, according to Malacañang.

Its main initiative for development is the Partnership for Growth (PFG) program, borne out of Obama’s Presidential Policy Directive on Global Development.

The Philippines is one of four pioneering nations selected for PFG, along with El Salvador, Ghana and Tanzania. Initiated in the Philippines in 2011, the PFG comes with more than $750 million in assistance for programs to drive inclusive growth, including the improvement of the Philippines’ regulatory regime to promote trade, investment and private sector growth; boosting the rule of law and anticorruption measures; improving fiscal performance through enhancing revenue-generation and improving fiscal accountability and expenditure management, and human capacity development through grassroots programs on education, health and infrastructure, among others.

Washington has also been a reliable provider of emergency assistance during times of disaster in the Philippines. The United State Agency for International Development (USAID) and the US military provided nearly $87 million in aid to support relief, early recovery and rehabilitation efforts in the aftermath of Super Typhoon Yolanda (international name: Haiyan).

The United States remains a favorite destination for Filipino workers and migrants, with an estimated 3.5 million Filipinos and Filipino-Americans on the US mainland, says the Philippine Embassy. Filipinos make up the fastest-growing and second-largest immigrant population in the United States, next to the Chinese.

In the wake of Yolanda, the Philippines requested the Obama administration to grant Philippine nationals in the United States temporary protected status, which would allow Filipinos who had traveled there with temporary visas—students, businessmen and tourists—to remain and obtain work permits.

Top Filipino, US businessmen to lobby for PH inclusion in TPP