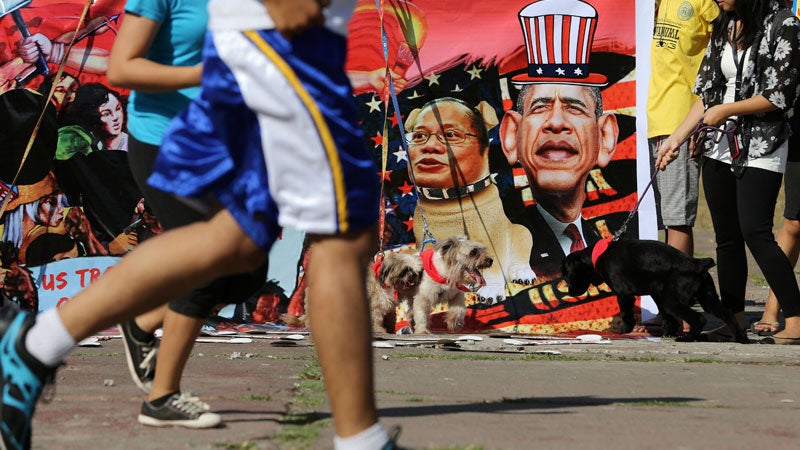 Filipino student activists bring their pet dogs to symbolize how Philippine President Benigno Aquino III is allegedly acting as a “lap dog of the U.S. government” during a rally at a park in suburban Quezon city, north of Manila, Philippines on Sunday, April 27, 2014. The group is opposing the visit of U.S. President Barack Obama and a looming pact that will increase the American military presence in the Philippines. (AP Photo/Aaron Favila)

MANILA, Philippines—Some 50 activists and artists on Sunday staged a protest march and burned a 10-foot effigy of Uncle Sam at Perez Park in Lucena City.

In Mindanao, two Moro groups are worried that the visit of US President Barack Obama would mean an increase in the presence of American forces in the country and lead to hostilities.

“US troops are no longer welcome here in the country. It will not only violate the Constitution but also disrespect our national sovereignty,” Alexandrea Pacalda, spokesperson of Sining Kalilayan (Silayan-Quezon), said in an interview during the protest march, which snaked through city streets.

Amid chants of “Oust Aquino!” and “Down with US imperialism!” the effigy was burned at the park where the march ended.

Pacalda said the effigy depicted “Uncle Sam’s Death Drones and Missile” and was the artist group’s contribution to the protest against the two-day visit of Obama in Manila, starting Monday.

Obama is scheduled to sign the controversial US-Philippine Agreement on Enhanced Defense Cooperation (AEDC) that would entail more US troop rotations in the Philippines.

The pact, Pacalda said, would strengthen not only US economic interests and military presence in the country but also its dominance in the Asia-Pacific.

Activist groups said US influence in the military’s counterinsurgency operations had resulted in more extrajudicial killings in the countryside.

Pacalda said her group would join other activists from Southern Tagalog in San Pedro town, Laguna province, before proceeding to Manila for the grand protest rally on Monday.

Lawyer Emmanuel Fontanilla, spokesman of the Misuari faction of the Moro National Liberation Front (MNLF), said the group welcomed the visit of Obama but hoped that the US government would bring good news of peace and not use the opportunity for saber-rattling.

“We ardently pray that the visit will create the political ingredients of peace and not war. More on economic prosperity rather than military might,” Fontanilla said.

He said the MNLF feared US intervention in Mindanao, especially because the Moro people had consistently fought for their right to self-determination and freedom for decades.

He, however, explained that the Moro people were prepared for US intervention. “We clearly anticipate the same because the policy of the United States is war to earn more money,” Fontanilla said.

“We would not join the calls for the total pullout of US soldiers in the country because talking is nothing. But what is sure is that our freedom fighters will shoot any foreign forces that would try to take away our lands,” Mama said.

He said his group was not worried of being included in the US terror list because, according to him, only the people in the community could judge who the real terrorist was.

For years, history taught the people that land-grabbers, warlords and alleged abusive government and military officials are the real oppressors and terrorists, he said.