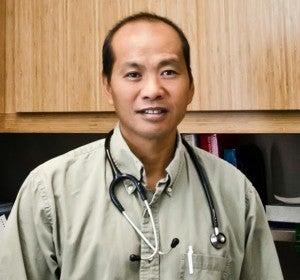 WASHINGTON, DC – Admirers mourned Dr. Jerry Umanos, who was slain by a gunman in Afghanistan April 24 as a selfless individual who is a source of pride for the Filipino American community.

“We extend our profound sympathies to his wife Jan and their three children,” stated Ed Navarra, chair of the National Federation of Filipino American Associations (NaFFAA).

“Dr. Umanos risked his life serving the people he loved. But instead of running away from danger to save himself, he chose instead to stay so he could continue to save the lives of others. His selfless dedication to duty is a source of pride and inspiration for our community.”

Umanos was gunned down by a security guard yesterday as he was walking out of the Cure International Hospital in Kabul, where he had served since 2005. Two other Americans were killed.

The doctor, who was a pediatrician in inner city Chicago for 16 years, was among 30 staff members from the Lawndale Christian Health Center sent to Kabul nine years ago to work in a health center for women and children.

Chicago Mayor Rahm Emanuel, in a statement, called Umanos “a proud Chicagoan and an American hero who sacrificed his own life to save others.”

“His senseless killing while on a humanitarian mission in Afghanistan has left a deep wound on our entire city,” Emanuel added. “He was a talented pediatrician, a loving husband, and a respected leader at the Lawndale Community Church who spent more than a decade training fellow doctors and treating some of the world’s most needy. He embodied the very best of Chicago and on behalf of the entire city, I send my deepest condolences to his family, friends, and entire community.”

“Afghanistan was just one of them,” she explained. “He always had a desire to be the hands and feet of Christ. He had a love and commitment that he expressed for the Afghan people because of that love for Christ. He saw the need. He went, as did I for several years. And that need continues.”

Jan Schuitema, who moved to Kabul with her husband, is a special needs teacher for Chicago Public Schools. One of their sons is a police officer in Grand Rapids, Michigan.