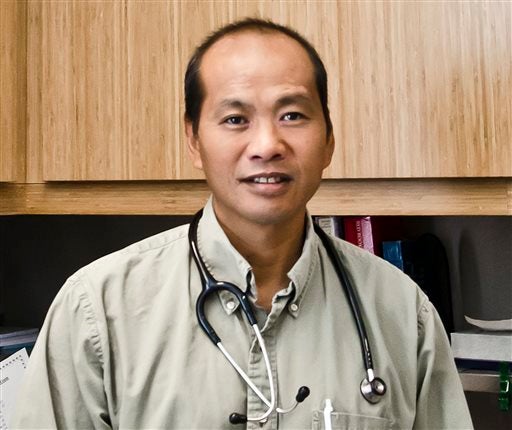 This undated photo provided by the Lawndale Christian Health Center in Chicago, shows Dr. Jerry Umanos, one of three physicians killed when an Afghan security guard opened fire on a group of foreign doctors at a hospital in Kabul, Afghanistan on Thursday morning, April 24, 2014. (AP Photo/Courtesy of the Lawndale Christian Health Center, Bernardo Barrios)

The shooting at Cure International Hospital in western Kabul was the latest in a string of deadly attacks on foreign civilians in the Afghan capital.

Two of the dead Americans were a father and son, Health Minister Soraya Dalil said, adding that the third American was a Cure International doctor who had worked in Kabul for seven years.

Dalil said an American nurse was also wounded in the attack. Their colleagues at the hospital performed surgery on the shooter, who was wounded during the course of the attack, officials said.

The attacker served in the Afghan Public Protection Force and was assigned to guard the hospital, District Police Chief Hafiz Khan said. He said the man’s motive was not yet clear. The APPF is an armed security force under Afghanistan’s Ministry of Interior that was created to protect foreign organizations that hire them.

Later in the afternoon, Dalil said the shooter was recovering from the surgery before being questioned.

The U.S. Embassy in Kabul confirmed that three American citizens had been killed in the hospital attack, declining to elaborate. Bektash Torkystani, an Afghan Health Ministry spokesman, identified the dead as foreign doctors.

According to its website, the Cure International Hospital was founded in 2005 by invitation of the Afghan Health Ministry. It sees 37,000 patients a year, specializing in child and maternity health as well as general surgery. It is affiliated with the Christian charity Cure International, which operates in 29 countries with the motto “curing the sick and proclaiming the kingdom of God.”

One of the victims was Chicago pediatrician Dr. Jerry Umanos, his mother-in-law Angie Schuitema said. The Lawndale Christian Health Center in Chicago on its website said that Umanos worked there as a pediatrician for more than 16 years before moving to Afghanistan in 2005.

Mark Knecht, Cure International’s chief financial officer, told reporters outside the group’s headquarters in Lemoyne, Pennsylvania, that it “remains committed to serve the people of Afghanistan.”

The Afghan capital has seen a spate of attacks on foreign civilians in 2014, a worrying new trend as the U.S.-led military coalition prepares to withdraw most troops by the end of the year.

It was unclear whether the Taliban were behind Thursday’s shooting, though the insurgents have claimed several major attacks that killed foreign civilians this year, an escalation of such attacks after years of mostly targeting foreign military personnel and Afghan security forces.

In January, a Taliban attack on a popular Kabul restaurant with suicide bombers and gunmen killed more than a dozen people. In March, gunmen slipped past security at an upscale hotel in the Afghan capital and killed several diners in its restaurant. Two foreign journalists were killed and another wounded in two separate attacks.

The hospital shooting is also the second “insider attack” by a member of Afghan security forces targeting foreign civilians this month.

Violence and insecurity have been spiraling in Afghanistan amid uncertainties surrounding the April 5 presidential election and the upcoming international troop withdrawal.

The results were based on 82.6 percent of the more than 7 million votes cast in the April 5 election to replace President Hamid Karzai, who is ineligible for a third term. Full preliminary results are expected to be announced Saturday and finalized May 14 after investigations into fraud claims and if no candidate gets a majority a runoff will be required.

Acting on intelligence that Wahid had been moved to the area and was about to be moved again, authorities set up checkpoints on major roads. When the kidnappers, who have not been identified, were stopped at one checkpoint, they fled on foot, leaving Wahid behind in the car, Safi said.