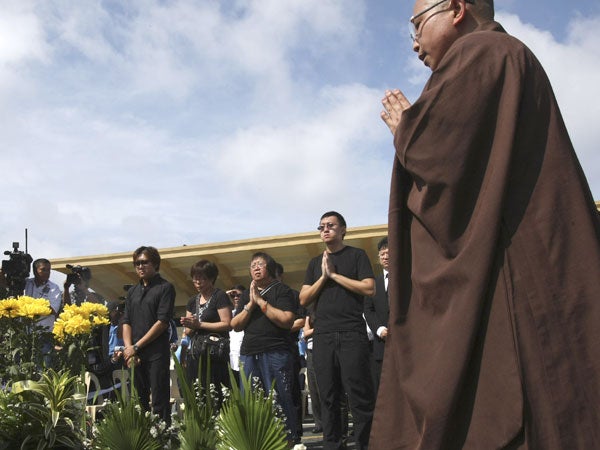 A year later, Buddhist monk leads the rites to mark the first anniversary of 2010’s botched bus hostage drama at the Rizal Park in Manila. They are from right front row, Tse Chi Hang, Lee Mei Chun, Lin Siu Ching, Tse Chi Kin, all relatives of Masa Tse, the tour guide who was the first to be killed by the hostage-taker. AP FILE PHOTO

HONG KONG—Money raised by Chinese-Filipino businessmen and businessmen in Hong Kong who have interests in the Philippines was used in the compensation package for the victims of the 2010 Manila hostage tragedy, a Manila councilman said on Thursday.

Eight tourists from Hong Kong died in a botched police rescue of a busload of tourists taken hostage by a dismissed Manila policeman who also died in the incident. Seven others were injured.

Binondo Councilor Bernardito Ang, who also tried to negotiate with the victims and is here with former President and current Manila Mayor Joseph Estrada, said no public funds were used for the compensation.

Ang said it was Hong Kong negotiators who suggested a total amount of HK$20 million (about P115 million) but he added that he did not know if the businessmen—who formed the Hong Kong-Philippines Friendship Foundation—were able to raise that much money.

“It was the businessmen who organized this solidarity fund because they also want the relationship between the Philippines and Hong Kong to normalize, especially for those in the travel industry,” Ang said in an interview.

“So, there is no government funding here,” he added.

Cable TV News reported on Wednesday that the Philippine government would offer HK$1.5 million (about P8.6 million) for each of the deceased and HK$3 million (P17.2 million) for the injured in a compensation package that would total HK$20 million.

But Ang said the Hong Kong government would be the one to decide how much each family would receive.

“We do not know how much each family would get because it will be the Hong Kong government that will allot to each victim depending on their injury,” he said.

Ang said the HK$20 million was an estimate given by negotiators from the Hong Kong side.

“That was what they suggested for the settlement because the victims also need support and rehabilitation,” he said.

“I do not know if (the HK$20 million) was raised. It would be the foundation that would be able to say that but many are helping,” he added.

Estrada had a closed-door dinner with members of the foundation on Wednesday night at Four Seasons Hotel after Hong Kong and the Philippine government announced that their row over the hostage drama was over.

As a result of the deal, Hong Kong restored the visa-free visits by holders of official Philippine government passports.

Cabinet Secretary Jose Rene Almendras said the funds should be seen as an abuloy (or financial assistance given to those whose loved ones died) and not as a “compensation package.”

“In abuloy, we share one’s resources. It cannot be seen as compensation. Abuloy is an act of humility. A Filipino who makes abuloy does so the person giving such is expressing a desire to be one with the family that is suffering,” he added.

However, Ang said not all the victims’ families have decided to accept the compensation.

“There are still some families that can’t accept that there’s no presidential apology. But in general, most have given their OK to the settlement,” he said.

Back in Manila, Almendras, President Aquino’s designated troubleshooter with Hong Kong, on Thursday emphatically declared that the dispute over the bungled Manila hostage rescue was “absolutely” over.

But while the Philippines has “settled” with Hong Kong, Almendras said the government was “still addressing the individual concerns of the families” of the 21 victims.

Almendras said there was no “one size, fits all” approach to the problem, noting that the Philippine side had to consider the demands and concerns of every family.

The joint statement between the two sides mentioned no categorical apology from the Philippine government, which instead expressed its “most sorrowful regret and profound sympathy” and extended its “most sincere condolences for the pain and suffering of the victims and their families.”

The agreement covered an “additional token of solidarity” to be given to the victims and their families “as a most sincere gesture of compassion of the people of the Philippines.”

“We were able to satisfy [what the families were asking for] without having to use that word [sorry],” he said.

But Almendras noted that not all of the families would accept such a token, saying some of them do not believe that it is appropriate for them to accept money.

“There is an extreme sensitivity on that topic, which is precisely why we did not use the word compensation,” he said. “No amount can ever compensate [for the loss of] human life.”

Almendras declined to disclose the amount of the “token,” but said families willing to accept it could receive it probably within the week.

He said the amounts came neither from the Philippine or Hong Kong governments, but were pooled from contributions from “businessmen and ordinary citizens” from both sides.

The “final agreement” actually came two weeks ago when Almendras said he signed a “final document” containing “records of discussions” between the Philippines and Hong Kong for more than six months.

But until last Monday, he said he was wary that some groups could “scuttle the initiative,” mainly if some of the families were talked out of rejecting the Philippine offer.

Almendras said he and his team had met with Leung and his Hong Kong counterpart, Edward Yau, before sitting down with the victims’ families. Also in the initial meeting was Estrada, who earlier worked to salvage relations with Hong Kong by offering an apology to the victims.

The Cabinet secretary said Estrada’s presence the other day in Hong Kong was “helpful because there are many audiences” that the Philippine side had to deal with, such as the families and members of the local media there.

“Just to get to that point, that they [families] are agreeing to see me, was a very long struggle for us. So I started the meeting by thanking them for allowing us to finally speak to them. And then I explained and discussed every one of the four major demands that they have. And I issued the apology. I explained to them the complex nature of a national apology and an apology from the President. We discussed many options,” Almendras recalled.

Instead, it was Philippine National Police Chief Gen. Alan Purisima who wrote letters to the families to express the government’s “sorrowful regret and profound sympathy and most sincere condolences.”

“Did I apologize for President Aquino? I did not say anything to that effect but I expressed certain emotions and certain things relative to that but it was not an outright [apology]. I have no authority to say, ‘I am sorry in behalf of the Republic of the Philippines,’ but we made sure that we addressed the issues.”

Before meeting with the families, Almendras said he had been warned by Hong Kong officials that “some of them are still very emotional so please be ready.”

Speaking for the five families that agreed to meet with Almendras’ group was the brother of Masa Tse, the tourist guide killed during the bungled rescue operation. Almendras said his team was told that the families considered the meeting “very solemn.”

“We can imagine the emotion, the difficulty. Here was the [slain tourist guide] promoting our country and this was what happened to her,” Almendras told reporters.

Almendras said he also met with Yik Siu-ling, who was shot in the jaw and had to undergo an operation in Taiwan. He said Leung had told Yik’s story to Mr. Aquino when the two leaders met on the sidelines of the Asia-Pacific Economic Cooperation summit in Indonesia last year.

“I told her that it was her story, it was her circumstances that really caused us to reopen the discussions and go to the table again,” the Cabinet secretary said.