MANILA, Philippines—A year after the August  23 tourist bus hijacking which ended in the death of eight Hong Kong tourists, relatives and other sympathizers held a simple ceremony in  remembrance of those killed by hostage-taker Rolando Mendoza in front of the  Quirino Grandstand. 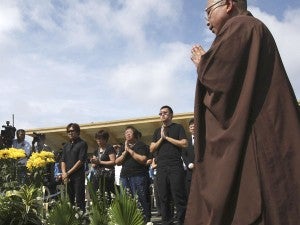 A Buddhist monk leads the rites to mark the first anniversary of last year's botched bus hostage drama at the Rizal Park in Manila Tuesday. They are from right front row, Tse Chi Hang, Lee Mei Chun, Lin Siu Ching, Tse Chi Kin, all relatives of Masa Tse, the tour guide who was the first to be killed by the hostage-taker. AP

On Tuesday morning, a delegation consisting of four bereaved family members, a survivor, a lawyer and Hong Kong legislator James To Kun-Sun, led a Buddhist remembrance ceremony at the site where the 10-hour standoff between Mendoza and the police came to a bloody end.

Instead of a tourist bus, a table covered with yellow cloth was placed at the Quirino Grandstand, surrounded by baskets and pots of yellow and white flowers. It was laden with offerings of beer, juice drinks, biscuits, incense.

Buddhist monks, in robes of orange, brown and yellow, surrounded the table, chanting in lilting Chinese for about an hour.

The Hong Kong group, dressed in black, stood solemnly in front of the monks, palms together, occasionally kneeling and bowing before the table.

The group arrived in the country on Sunday and met with Justice Secretary Leila de Lima on Monday. They are set to fly home on Wednesday morning.

But it seems they’ll be returning to Hong Kong disappointed—because no Philippine official has directly apologized for the incident.

This was largely the sentiment of the kin of slain tour guide Masa Tse Ting-chunn, as revealed in an interview after the ceremonies.

“We’re asking for a formal apology from the Philippine government. We ask that the government be held accountable for the incident because they made many silly mistakes and many wrong decisions. Someone has to come out and take responsibility. Someone has to compensate all those injured and hurt in that incident,” he said.

He said it was the least the Philippine government can do, considering “We will never forget the pain. Whenever we have family gatherings, we remember we lost Masa. I lost my brother. The pain is still here,” he added.

To revealed that they had four demands, as relayed in their meeting with De Lima: “A formal apology directly to the victims and their families; reasonable compensation;” for those responsible be held liable for gross negligence; and “for the government to implement remedial measures to safeguard tourists.”