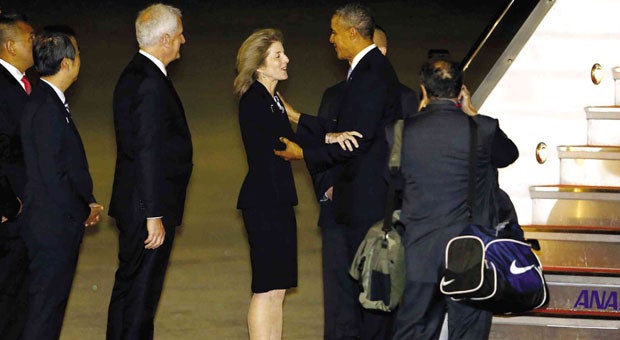 ASIA TOUR STARTS US President Barack Obama is welcomed by US Ambassador to Japan Caroline Kennedy upon his arrival at Haneda International Airport in Tokyo on Wednesday night. Obama is starting a four-nation Asia-Pacific region tour with a three-day state visit to Japan. He will also visit South Korea, Malaysia and the Philippines. AP

TOKYO—US President Barack Obama’s travels through Asia aim to reassure partners about the renewed US commitment to the region, with an eye both to China’s rising assertiveness and the fast-growing markets that are the center of gravity for global growth.

The question: Will it be enough?

Nearly seven months after he canceled an Asia tour due to the US government shutdown, Obama’s failure to prevent Russia from annexing Crimea has sharpened concerns that America lacks the will or wherewithal to follow through on its much-touted “pivot” to the Asia-Pacific region.

“Words come easy,” said Philippine political analyst Ramon Casiple. “But US allies would want to know what help they can get when things reach a point of no return.”

Obama is arriving in the Philippines next Monday, at the end of a four-nation tour that also takes in Japan, South Korea and Malaysia.

The United States has been stepping up regional military deployments, but has made less progress on rebalancing through broader diplomatic and economic initiatives, such as the Trans-Pacific Partnership (TPP), a Pacific Rim free-trade agreement.

Obama arrived in Tokyo on Wednesday for the first state visit to America’s closest ally in Asia by a US president since Bill and Hillary Clinton came in 1996.

He will be the first sitting US president to visit Malaysia since Lyndon Johnson in 1966. Allies South Korea and the Philippines are also keen to shore up security ties.

US allies wonder if America has adequate capability to back them up in territorial rifts with China, Caspile said, given Washington’s budget problems and preoccupation with crises elsewhere.

“The American objective is to reassure countries that … America is here to stay and is going to keep a strong interest in dealing with China together with those countries,” said Koichi Nakano, a political science professor at Tokyo’s Sophia University.

A report released last week by the US Senate Foreign Relations Committee urged that more effort and money be devoted to upgrading alliances in the Asia-Pacific region. “A successful rebalance must underscore the strategic message that the policy represents an enduring US commitment to the region, assuring our partners that we are in it for the long haul,” it said.

During a recent Asian tour, US Defense Secretary Chuck Hagel pledged to deploy two more ballistic missile defense destroyers in Japan by 2017 in a bid to allay Japan’s worries over a territorial dispute with China and missile launches by North Korea.

Hagel also rebuked Beijing for escalating the territorial dispute, which is over Japanese-controlled islands in the East China Sea that Japan calls the Senkaku Islands and China calls the Diaoyu.

The United States is obligated to protect Japan from attack, but has sought to avoid taking a stand on sovereignty over the islands. Tokyo is hoping for more in the way of confidence building, said Hitoshi Tanaka, chair of the Institute for International Strategy in Tokyo.

“We would like to see the president make a strong, clear statement about the Senkaku,” Tanaka said. “There is a need for Japan and the US to work to improve the security situation in East Asia.”

Obama tried to set the record straight in a written response to questions published in Japan’s Yomiuri newspaper before his arrival on Wednesday. He confirmed the US position that its mutual security treaty with Japan applies to the Senkaku.

“At my direction the United States is once again playing a leading role in the region,” he wrote, adding that US engagement with China would “not come at the expense of Japan or any other ally.”

Obama made it clear that hostile action against Senkaku Islands would spark an American reaction.

“The policy of the United States is clear—the Senkaku Islands are administered by Japan and therefore fall within the scope of Article 5 of the US-Japan Treaty of Mutual Cooperation and Security,” Obama said.

Obama’s two-night stay in Tokyo—just enough for the state visit the Japanese had pushed for—in itself sends a good message, said Matake Kamiya, a professor at the National Defense Academy in Yokosuka, near Tokyo.

“It’s important not only for the psychology of the Japanese but also for the impression given to the Chinese and North Koreans,” he said.

The United States has 50,000 troops in Japan and about 28,500 in South Korea, where it just concluded joint exercises.

But Tokyo and Seoul remain at odds over a separate territorial dispute and lingering Korean resentment of Japanese aggression before and during World War II.

Getting an early start on fence-mending, Obama brought Japanese Prime Minister Shinzo Abe and South Korean President Park Geun-hye together for their first face-to-face meeting since they both took office over a year ago, on the sidelines of a recent nuclear security summit in The Hague.

A visit by Abe in December to Tokyo’s Yasukuni Shrine, which enshrines 14 convicted war criminals among 2.5 million war dead, irked the United States and angered both South Korea and China.

At least two members of Abe’s Cabinet, and dozens of other lawmakers, paid respects at the shrine just days before Obama’s arrival. South Korea described the visits as “deplorable.”

But the leaders’ attention may well be diverted by a tragic ferry sinking, which left more than 300 missing or dead, most of them teenagers.

Both the United States and Japan have stepped up support for the Philippines, the last stop on Obama’s eight-day journey, with Tokyo offering retired coast guard cutters to help fend off intrusions by Chinese naval vessels near still other disputed islands in the South China Sea.

The Philippines is negotiating with Washington for a beefed up security agreement to allow more access for US troops, ships and aircraft to detect and deter such incursions.

US bases in the Philippines closed when the country ended their leases in 1992, though the two sides have an agreement allowing limited US troop visits, mainly in the south where Filipino troops are battling terrorists. Reports from AP and AFP