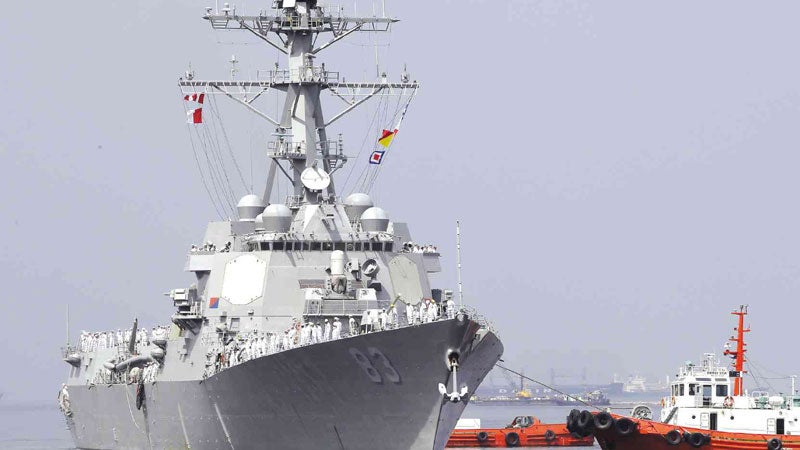 PORT CALL The USS Howard, an Arleigh Burke-class, guided missile destroyer from the US Pacific Fleet, arrives in Manila on Friday on a “routine” port call. BULLIT MARQUEZ/AP

Philippine negotiators are just about ready to submit proposed “key points” for an enhanced defense cooperation agreement that would give the United States wider access to Philippine military bases, as the two countries ended their eighth round of talks on Friday, raising speculation that the deal could be ready in time for US President Barack Obama’s visit on April 28-29.

“This round brought us much closer to finding full consensus, and the draft provisions on key points of an enhanced defense cooperation will be submitted to the President for his review,” said Defense Undersecretary Pio Lorenzo Batino in a statement released by the defense department.

The Philippine Ambassador to the United States, Jose Cuisia Jr., expressed optimism that negotiations for the security deal will have already been concluded by the time Obama arrives.

The proposed “Agreement on Enhanced Defense Cooperation” will allow the US wider access to Philippine military bases amid increasing Philippine tensions with China in the West Philippine Sea.

Batino said consensus was reached on “key provisions and modalities that would reflect, among others, full respect for Philippine sovereignty, nonpermanence of US troops and no US military basing in the Philippines and a prohibition against weapons of mass destruction.”

The draft agreement was described as “anchored on mutuality of benefits.”

The agreement would also state that the US would “not establish a permanent military presence or base in the territory of the Philippines.”

The Philippine Constitution prohibits the establishment of foreign military bases on Philippine soil.

“Furthermore, the United States has agreed that any equipment and matériel that the US military may bring into the country ‘shall not include nuclear weapons,’” the statement said.

The agreement will also include the protection of the environment, human health and safety.

The Philippines is seeking a stronger defense cooperation with the US as its territorial dispute with China intensifies.

The US plans to “rebalance” its forces in the Asia-Pacific region, and has similar arrangements with Australia and Singapore, as part of its strategy to contain China’s growing military power.

“After 15 years of the Visiting Forces Agreement and given current realities, challenges and opportunities, the Philippines is ready for a heightened level of defense cooperation.  This agreement, which should stand on mutual trust, is an idea whose time has come,” Batino said.

The panel will submit the draft provisions to Mr. Aquino “soonest,” Malaya said in a text message.

“While the panels concluded the eighth round of negotiations, work continues in their respective capitals,” Malaya said.

The talks began in August last year amid China’s increasing aggressiveness in claiming territories in the South and East China Seas, engaging the Philippines and Japan in a bitter maritime row.

With the changing regional security landscape, the Philippines and the US have no other option but to “make our alliance stronger if we are to maintain international and regional security,” Yparraguirre said in the statement.

She said the proposed agreement is “a step toward realizing that objective.”

Yparraguirre described the agreement being negotiated as a “new model of security engagement” for the Philippines and the United States.

“As we strive to further enhance our security cooperation, we are looking into new dimensions of significant strategic and operational value,” she said.

Batino said the proposed agreement would provide the Philippines the “critical and timely support” its armed forces needs for its modernization to achieve a minimum credible defense posture.

It also provides for a  “more expeditious humanitarian assistance and disaster relief and the provision of jobs and other economic opportunities through the local goods and supplies procurement that will be made by the United States military.”

US to protect allies

The US has categorically said it will protect its allies, the Philippines and Japan, which are engaged in territorial disputes with China in the South and East China Seas.

The Philippines has filed a case with a United Nations tribunal to nullify China’s taking control of shoals and reefs within its 370-kilometer exclusive economic zone.

China, which claims virtually all of the South China Sea, claims that the areas are in the nine-dash-line marker of its official map.

Manila will be Obama’s last stop in a four-nation swing through Asia, which includes visits to Japan, South Korea and Malaysia.

His wife, Michelle, is not expected to accompany him on the trip, a “working visit that has some characteristics of a state visit,” Cuisia said.

Details of the visit are still being worked out by the White House, said the envoy, but Obama is already confirmed to be meeting with President Aquino and his Cabinet.

“I think the important thing is to precisely reaffirm the strong military and security alliance, strong economic relations and people-to-people exhanges that we’ve had between the US and the Philippines for so many years,” he told reporters following a speech before Philippine business leaders in Makati on Friday.

The last US presidential visit was that of Obama’s predecessor, George W. Bush, who made a nine-hour visit in October 2003.

Asked whether Obama will visit typhoon-hit Eastern Visayas, as earlier speculated, Cuisia said the US President had no room for that on his itinerary.

The US is among the largest foreign donors to relief, rescue and recovery operations in the disaster zone, donating $85 million to the effort.

“No, he doesn’t have much time, and the logistics of a residential visit [to a disaster zone] will be very hard. If Secretary Kerry’s (US Secretary of State John Kerry) visit was hard, [Obama’s] would be harder,” said Cuisia, referring to Kerry’s visit to Tacloban City last December.

Cuisia said Obama had long been meaning to come, and that he would push through even without “recent developments.”

He said that the visit is pushing through six months after a planned visit in October was postponed because of the partial US government shutdown.

“We’re just one of two treaty allies in Southeast Asia, the other being Thailand. He has not been here in his five years as president, so obviously, he wanted to come. He’s been wanting to come, and he was telling me that in fact he really wanted to come to Philippines,” he said.

“Now, it’s just a coincidence that we are having these ongoing developments. And whether there were these developments or not, he would have still come, being a treaty ally,” he said.

The US is the Philippines’ top defense partner, with a $50 million allocation for the country this year under its foreign military financing program.

As to whether the new security agreement would enable the Philippines to request for greater US assistance in terms of acquiring defense matériel for its military upgrade, Cuisia said: “We have to tell the US what it is we need.”

The envoy said he knew of earlier Philippine plans to request a long-range patrol aircraft and additional C-130s from the US.

US to defend PH

Cuisia also confirmed that the US military provided some assistance to the Philippines in strategizing a recent resupply and troop rotation mission’s evasion of Chinese Coast Guard ships that tried to stop it from getting to the Ayungin Shoal.

Cuisia said US support to the mission was part of its regular activities under its commitment to Philippine defense under the Mutual Defense Treaty and the Visiting Forces Agreement.

The US has expressed its commitment to defend the Philippines in the face of aggression, most recently reiterated by US Defense Secretary Chuck Hagel during a visit to China earlier this week.

While maintaining neutrality in the territorial claims, the US has categorically rejected China’s expansive claim in the South China Sea for lack of basis and repeatedly expressed support for the Philippine decision to seek arbitration in the UN.

Cuisia said a favorable tribunal decision would “strengthen our case as far as international public opinion is concerned.”

He said the Philippines hoped to see the tribunal’s action in the case “within six months,” perhaps through calling for oral arguments “if they deem it necessary.”

PH, US agree on bases use

PH, US rush defense talks for Obama visit this month