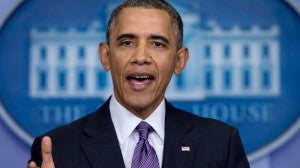 MANILA, Philippines – Malacañang on Wednesday confirmed that the Trans-Pacific Partnership (TPP) Agreement will be among the topics tackled during the visit of United States President Barack Obama to the country.

“There are three major areas that will be covered in the dialogue of the two leaders…What you mentioned about the TPP falls under the second category (expanding trade and agreement),” Communications Secretary Herminio Coloma said in a Palace press briefing.

The TPP is a free trade agreement being negotiated by 12 countries, led by the US. It is meant to open up economies in Asia and the Pacific. The other 11 countries are Japan, Brunei, Malaysia, Vietnam, Singapore, Australia, New Zealand, Canada, Mexico, Chile and Peru.

“The Philippines is not among the first 12 countries that are involved here. So what we are doing now is to explore possibilities, if our direct participation in this partnership can be made feasible, and that will be part of the discussions,” Coloma explained.

Earlier this year, US businessmen pointed out that amending the Philippine Constitution may be necessary to quality for the TPP. The charter change would have to address the prescribed foreign ownership limits.

But President Benigno Aquino III at that time said he was not keen on the idea, adding that there should first be concrete evidence showing that it will truly benefit the country.

Obama will be in the country from April 28 to 29. It is his first state visit to the Philippines.

“This visit will provide both leaders an opportunity to exchange views on their strategic vision in the 21st century, and discuss new avenues to further strengthen the longstanding relations between the two countries by intensifying political and security cooperation, expanding trade and investments, tourism and development cooperation, and deepening people-to-people ties,” Coloma said.

Besides the TPP, the Enhanced Defense Cooperation Agreement (EDCA) is expected to be discussed, if not signed. However, Coloma denied that talks on the EDCA are being rushed so it may be signed in time for Obama’s visit.

The spokesperson said the visit will be the “peak of a series of recent high-level exchanges” between the Philippines and the US.

The US is a major trading partner of the Philippines, with total trade reaching $14.5 billion in 2013. It is also the second largest export destination for the Philippines, next to Japan, with exports amounin to $7.8 billion.

From 2011 up to 2013, US assistance to the Philippines has amounted to over a billion dollars.

Top Filipino, US businessmen to lobby for PH inclusion in TPP