10 US presidents who visited the PH (and what they said) 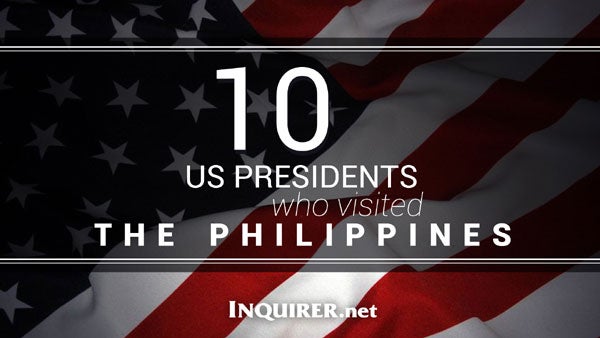 An American president visiting the Philippines has always been a big deal.

So it’s not surprising that President Obama’s upcoming brief stop in Manila has generated excitement and will be closely watched and examined.

The questions on the Obama visit will no doubt range from the petty – “Will he wear a barong? Will he agree to perform a karaoke song?” — to the extremely serious – “What promises will he make to Manila amid rising tensions with China?”

To warm up for Obama’s arrival, it may be worth looking back on other U.S. presidents who visited the country — and on what they did and said during their stay.

Here are 10 of the most memorable and controversial visits to the country by a current, future or former American president. 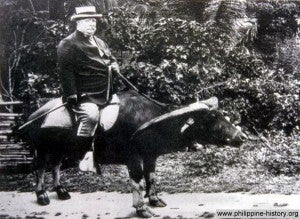 Before he became president, William Howard Taft served as governor general of the U.S. colonial regime in the Philippines.

He became famous (or infamous) for one phrase: He called Filipinos America’s “little brown brothers.” It was an odd statement especially since he said it around the time the U.S. was waging a brutal war of occupation that eventually killed at least 200,000 of these “brown brothers.” (Some historians say the total death toll reached a million).

Taft is also remembered for a photo showing him riding a carabao, a fitting image for what turned out to be the beginning of, for Filipinos, a long, often burdensome relationship with the U.S. 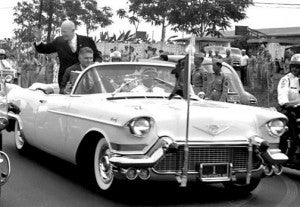 The first sitting U.S. president to visit the Philippines also served in the US colonial regime. But when Dwight Eisenhower visited Manila in 1960 during the administration of President Carlos Garcia, the Cold War was in full swing, and the U.S. viewed the Philippines as a key ally in this fight in Asia.

“In the lands that Communists now master with an iron rule, the eternal aspirations of humanity cannot be forever suppressed,” he said at a speech at the Luneta.

But beyond the Cold War rhetoric, Eisenhower also reflected on the time he spent in Manila as assistant to Douglas MacArthur, recalling how Luneta was “for more than four years the scene of my habitual evening walks.”

Lyndon Johnson visited Manila amid intensifying opposition in the U.S. and and the Philippines to the Vietnam War. The visit was a big boost to newly elected president Ferdinand Marcos, whom LBJ called “my right arm in Asia.” 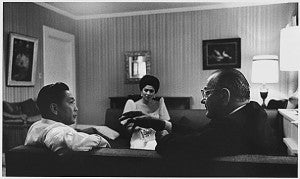 The visit underscored the contradictory image of Johnson, who is respected for his role in many groundbreaking US civil rights laws and policies geared to helping the poor in the U.S., but is also reviled for escalating the conflict in Indochina.

(There are some parallels with Obama, who’s won praise for progressive domestic policies, highlighted by a law that expands access to health care, especially for poor Americans, but who has also drawn criticism for the civilian deaths caused by drone strikes and for condoning the use of torture and massive government spying.)

Johnson talked a lot about her and his wife Lady Bird Johnson in his state dinner speech, saying, “We are very fortunate, Mr. President, in the choice of our wives — you and I, Mr. President, may win elections, but our wives win hearts.” 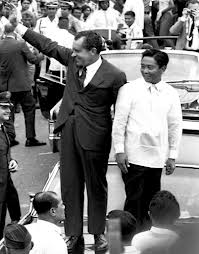 Richard Nixon visited Manila in 1969. That would have been an awkward time for a nation that touts itself as the world’s beacon of democracy: Marcos had just won re-election in 1969 in one of the dirtiest campaigns in history. But then again that was probably not a big deal to an American president who later would have to declare: “I am not a crook.”

Their own futures turned out to be not that wonderful. Nixon would later be forced to resign in shame in the wake of the Watergate scandal, while Marcos would be overthrown in a popular uprising.

Just months after Nixon, Marcos received another important U.S. visitor. Ronald Reagan was governor of California when he and his wife Nancy visited Marcos and Imelda in September 1969. The Reagans were special guests at the opening of Cultural Center of the Philippines 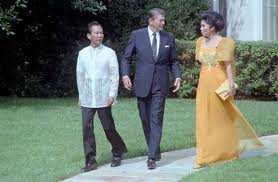 It marked the beginning of an important friendship between Marcos and Reagan who, as president, would embrace other fascist despots throughout the world. Reagan would later recall that first visit when he welcomed the dictator to Washington in 1982.

“We welcome old and good friends to the White House in a visit symbolic of the superb relationship between our two countries,” Reagan said. “It’s a nostalgic occasion for us, as well. Nancy and I often think of our 1969 visit to Manila, when we first experienced that unexcelled Philippine hospitality as the guests of our guests here tonight.” 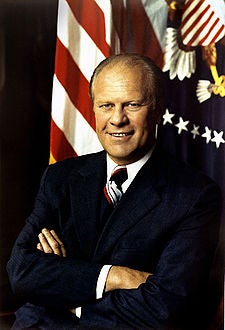 Gerald Ford came to Manila in 1975 at a time when Marcos was fast consolidating his power. The American president was there to give Washington’s blessings to a regime that had jailed democratic opponents and had unleashed a reign of terror.

Ford apparently had a good time, praising, in comments during a state dinner, the hospitality of Filipinos, which even reminded him of his Sunday school teacher.

“My then Sunday school teacher told me that the beauty of Joseph’s coat was its many colors. So, I say to you in the Philippines, the strength of your nation is its diversity which has been woven into a strength that will forever be a pillar for your great country.” 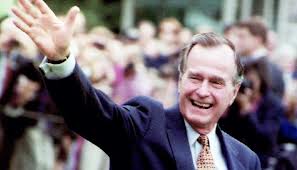 He looked good in a barong, but would later have a hard time explaining his mind-boggling endorsement of a government that, by then, was notorious for gross violations of human rights and brazen abuse of power.

“We stand with the Philippines,” Bush said, toasting Marcos. “We love your adherence to democratic principles and democratic processes. We will not leave you in isolation.” 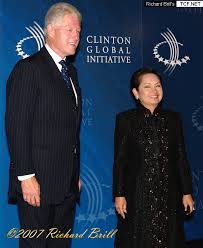 Clinton visited the Philippines twice. The first was a state visit in which he declared how “over the last 50 years, the relationship between the United States and the Philippines has changed, has grown, has matured, but we are still very much bound together in ways that I think are positive.” 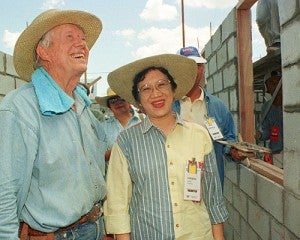 Jimmy Carter never had a chance to visit the Philippines when he was president. It’s probably because of his strong emphasis on human rights, which may not have inspired Marcos to extend an invitation.

But Carter visited the Philippines 1999 to build affordable homes as part of the Habitat for Humanity campaign. It was a generally low-key visit by the former president who said, “There is no greater satisfaction than helping a family build a home they’ll be able to call their own for the first time in their lives.”

Like his dad, George W. Bush looked good in a barong. Welcomed in Manila by President Gloria Macapagal Arroyo, he even tried to show that he was familiar with Philippine history by mentioning Jose Rizal in a major speech.

“The great patriot Jose Rizal said that nations win their freedom by deserving it, by loving what is just, what is good, what is great to the point of dying for it,” he said in a speech before a joint session of the Philippine Congress. “In the 107 years since that good man’s heroic death, Filipinos have fought for justice; you have sacrificed for democracy; you have earned your freedom.” 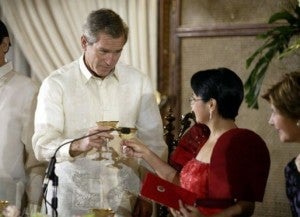 But then Bush also said, “America is proud of its part in the great story of the Filipino people. Together our soldiers liberated the Philippines from colonial rule.”

Clearly, the second President Bush never heard of another American president who had his picture taken riding a carabao and why the latter was here.