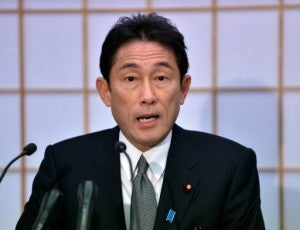 MANILA, Philippines—Japan, which is facing similar security issues with China, has reaffirmed its support for the Philippine recourse to international arbitration over its dispute with Beijing involving territories in an area of the South China Sea, called the West Philippine Sea by the Philippines, citing its basis in international law.

Japanese Foreign Minister Fumio Kishida has conveyed his government’s support for the Philippines’ filing of a case before a UN tribunal to settle its dispute with China as he reiterated Tokyo’s advocacy of the rule of law, the Department of Foreign Affairs (DFA) said in a statement.

“Referring to the Philippines’ submission of its memorial in furtherance of the arbitration proceedings it has initiated relative to South China Sea/West Philippine Sea issues, Minister Kishida reiterated Japan’s support for the Philippines’ effort to seek a resolution grounded on international law, which is consistent with Japan’s own rule of law advocacy,” the DFA said.

Kishida met with Foreign Secretary Albert del Rosario for talks at the former’s residence in Hiroshima on April 11. Hiroshima, which bounced back from the devastation wrought by an atomic bomb in 1945, hosted the 8th ministerial meeting of the Non-Proliferation and Disarmament Initiative (NPDI).

The 12-nation regional grouping of ministers was formed in 2010 with the goal of a “world free from nuclear weapons” through advancing nuclear nonproliferation and disarmament processes, the DFA said. The Philippines joined the initiative in September last year.

During the meeting, Kishida and Del Rosario resolved to promote bilateral maritime cooperation, with Japan vowing to sustain its support to boost the capacity of the Philippine Coast Guard through the provision of communication systems, patrol vessels and personnel training.

The two sides also committed to pursue a continuing dialogue on security issues through various forums, including the 7th Philippines-Japan Political-Military Dialogue to be held next month in Manila.

Kishida reiterated Japan’s commitment to support the reconstruction and rehabilitation of areas devastated by Supertyphoon “Yolanda.” Tokyo is one of the biggest donors to the multinational effort, giving some $120 million in immediate assistance

The Japanese official also assured Del Rosario of Japan’s sustained support for the Mindanao peace process as he congratulated the government on the conclusion of the peace talks with the Muslim rebels and the recent signing of a final agreement.

On the ground, Japan is also implementing grassroots projects to spur development in conflict-affected areas across Mindanao through the broad-based Japan-Bangsamoro Initiative for Reconstruction and Development.

Japan is also locked in a maritime dispute with China for ownership of territories in the East China Sea, over which China last November unilaterally declared an air defense identification zone.

The Philippines filed a case against China before the United Nations arbitral tribunal in January last year as a “last recourse” in hopes of clarifiying maritime entitlements of both sides in the South China Sea, nullifying China’s “excessive” nine-dash line claim that encompasses 90 percent of the waters, and stopping Chinese incursions into the Philippines’ exclusive economic zone.

While China has refused to take part in the proceedings and called for direct negotiations instead, the Philippines is pushing ahead with the legal action, filing on March 30 a memorial detailing the merits of its case.

The United States, Germany and the European Parliament have also expressed support for the Philippines’ decision to seek arbitration as a peaceful means of resolving the dispute.